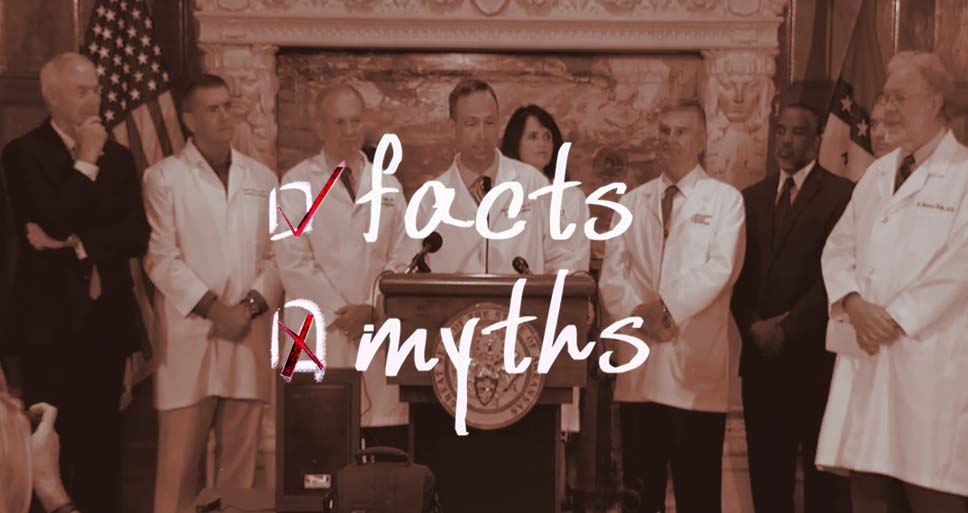 Supporters of Ballot Issue 7 fact-check the Governor’s claims cannabis has no medical value and his attempt to prevent sick and dying Arkansans from having an option to access medical cannabis even when their doctor recommends it.

LITTLE ROCK, Arkansas (Sept. 12, 2016)— Governor Hutchinson, a former Administrator of the Drug Enforcement Administration, and a handful of doctors today took to the podium to announce their grave concern over the safety and efficacy of cannabis medicine. Too bad the facts weren’t with them.

Fact: According to a 2013 New England Journal of Medicine survey, 76 percent of physicians support medical cannabis.

Fact: FDA-approved Marinol, a synthetic version of THC—the psychoactive ingredient in cannabis, is only one of more than 80 compounds found in the whole cannabis plant. Most patients that try Marinol find it expensive, difficult to use and ineffective compared to the benefit they receive from medical cannabis. Marinol was even the primary cause of death in four cases during the past 20 years. Yet, cannabis has never been indicated as a primary cause—ever.

Fact: Arkansas has an opioid prescription problem with 1.16 prescriptions for every Arkansan in the state. The state ranks 8th in the nation for number of prescriptions written per person. Opioid-based medicines are lethally toxic. According to the Centers for Disease Control (CDC), 42 people die every day in the U.S. due to opioid use. Recent studies show that medical cannabis lengthens the interval between opioid doses in chronic pain patients and lowers tolerance, meaning that pain management is not only more effective—it’s also safer. This is evidenced most clearly in a 2014 JAMA article which found that states with a medical cannabis laws had a 24.8% lower mean annual opioid overdose mortality rate.

“It’s reprehensible that the Governor would tell seriously ill patients in Arkansas to wait for the federal government to reschedule cannabis. This could take years. Sick and dying Arkansans have waited long enough. These patients and their families need relief now—just like similar patients have in 25 others states and the District of Columbia. Luckily, voters will have the choice to vote for Issue 7 this November” said Ryan Denham, Deputy Director Arkansans for Compassionate Care.

Additional news conference panelists, including Arkansas Surgeon General Greg Bledsoe, cited references to the lack of medical benefits and risks of adolescent exposure. Many of those references have long been disproven and may be an attempt to strike undue fear in the minds of Arkansans.

Fact: On September 8, 2016, the CDC released a report stating cannabis use declined among adolescents in states with medicinal cannabis.

There is a mountain of evidence showing that medical cannabis is both safe and effective, which is why 76 percent of our nation’s physicians and dozens of public health organizations support it. Groups like the American Nurses Association, American College of Physicians, American Public Health Association and the National Institute of Medicine have all publicly stated that medical cannabis can help sick and dying patients with a variety of medical conditions.

Medical cannabis is far less harmful and poses fewer negative side effects than most prescription drugs—especially painkillers. Sick and dying patients in Arkansas deserve an option to access this medicine without being subjected to an undetermined timeline from our federal government. They need safe and legal access now.

About Arkansans for Compassionate Care

Arkansans for Compassionate Care is a coalition of concerned patients, physicians and allies who agree that sick and dying patients should have access to medical cannabis with a doctor’s recommendation. For tens of thousands of chronically-ill Arkansans, the relief afforded by medical cannabis helps them live comfortably without harmful side effects. But cannabis is currently unregulated and not legally available.

Arkansans for Compassionate Care offers a better choice: controlled access to a medicine that is proven to be both safe and effective, especially against the debilitating effects of chronic illness and harsh medical treatments.

The Arkansas Medical Cannabis Act was certified to appear on the November 2016 General Election ballot on July 7, 2016 as Issue 7.