In the above video by Reason.tv, Dr. Abrams examines many issues surrounding medicinal cannabis.

One of the most well known and prestigious doctors associated with cannabis medicine is Dr. Donald Abrams.  He is Chief of the Hematology-Oncology Division at San Francisco General Hospital and a Professor of Clinical Medicine at the University of California San Francisco.  Such achievements bring unprecedented credibility to the concept of medicinal cannabis as a whole, which many people still refuse to acknowledge.  Moreover, Dr. Abrams is remarkably well spoken, down-to-earth, and at times humorous, making him especially effective as an educator and doctor.

Many have asked why conducting research on cannabis is so difficult and why more clinical studies are not underway, given that cannabinoids are theorized to have such widespread medical utility.  Some have even died while awaiting access to approved research programs due to federal barricades.

The central problem is the only legal source of cannabis to do research with is the federal government, via the National Institute on Drug Abuse.  As the name suggests, the institute has traditionally focused on drug abuse, and thus has been reluctant to provide cannabis for therapeutic study.  However, things have started to change in the past decade.

Within the five years, The University of California Center for Medicinal Cannabis Research was created with a California budget surplus to study cannabis.  An arrangement was made where NIDA would supply the CMCR with cannabis, as long as NIDA did not have to fund the studies themselves.  Dr. Abrams led the first of many studies, which investigated cannabis for treatment of HIV-related peripheral neuropathic pain.  It found that;

Dr. Abrams is well-versed in cannabinoid science, and explains that we evolved with cannabinoid receptors not necessarily to utilize plant cannabis, but because we have endogenous cannabinoids.  These endocannabinoids are mostly produced “on-demand” by cells to produce biological effects, such as retrograde signaling.  This is the process by which receiving cells give feedback to sending cells, primarily through the synthesis and release of an endocannabinoid called 2-arachidonoyl glycerol (2-AG), which binds to the sending cell’s cannabinoid receptors on its axon terminal.  It is possible that repairing dysfunctional retrograde signaling processes is a therapeutic mechanism of phytocannabinoids, but far more research is needed. 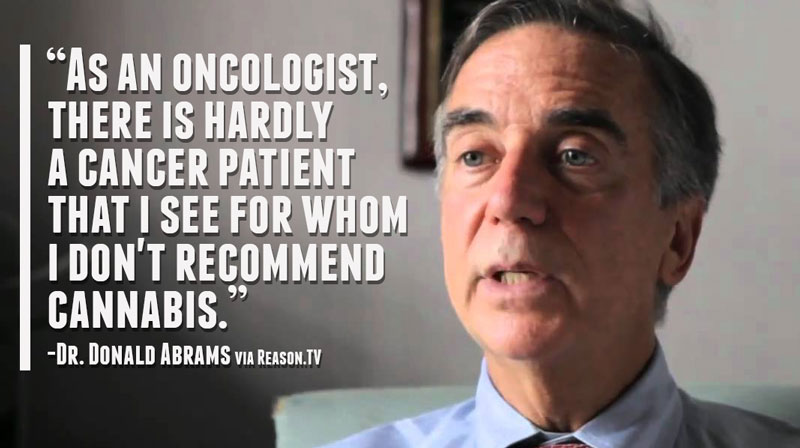 As a practicing physician, Dr. Abrams has worked with multitudes of patients and says;

As an oncologist, there is hardly a cancer patient that I see for whom I don’t recommend cannabis,

It’s unfortunately all about politics and not science, and when it comes to the health of the nation I think that’s a problem.

A new 2014 clinical trial headed by Dr. Abrams will focus on the effects of vaporized CBD oil for treating symptoms of sickle cell anemia.  This is groundbreaking because it is apparently the first time the government is providing a high-CBD extract for research, rather than raw cannabis.

Furthermore, it was noted above that in previous studies, NIDA only consented because they didn’t need to provide funding.  In this new 2014 trial, both the cannabis and funding will come from the government. See the video below…

With the dramatically rising interest in medicinal cannabis and applications for CBD, it’s not surprising that even the feds are starting to take note.

When do you think all 50 states will have access to medical marijuana?  Let us know your prediction in the comments section below…