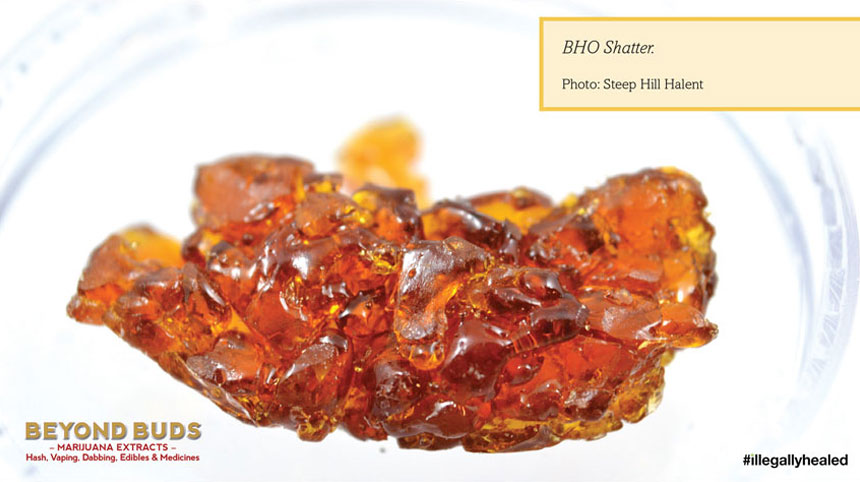 A friend of a friend asked if I’d teach her about dabs … otherwise known as cannabis concentrate. So I began to try to remember any recent articles I had read that described dabs or dabbing well, and I thought screw that! I’ll explain it in my words.

First let’s talk about edible oil and how the oil is collected from the olives, nuts, vegetables, canola, hemp and so on. Do you know what the term “cold pressed” means? We’ve all read it multiple times on olive oil bottles. We’ve learned very quickly that “cold pressed” is the top echelon of olive oils and the one that you should buy if you can afford it. That means that the product is poured into a press-type machine that basically grinds the oil out. This friction causes heat, and that heat can deteriorate the quality of the oil, so someone is there at all times to check the heat of the mash-like end-product. It’s a very expensive and time-consuming process that is reflected in the price.

From there that end product is sold off to other companies or moved to a tank where the remaining oil is collected in another way. And guess what? It’s pretty much identical to how dabs are made. Crazy eh? Regardless of what the product is, these oils and now dabs are made by using a liquid chemical solvent.

So here’s the process in my words. The product is immersed in, doused with, or had the solvent sprayed through it and out the other side in a ‘baby and bathwater’ kinda way. Y’know, don’t throw the baby out with the bathwater? Except that’s exactly what you want. Those babies being heart and brain healthy fats, or therapeutic cannabis terpines and cannabinoids. So yes, you want the babies to come out with the solvent and into a bowl or vat. The solvent then is left to evaporate. What’s left, in theory is a concentrate oil or when cannabis is the product, a sticky, waxy, gummy substance.

Some topics of debate in the cannabis world include:

Much of the cannabis concentrate is made using butane in a form that is pure. The one most people use is called Puretane and boasts 99.9998% purity. This is not your everyday butane, it’s a chemical solvent that has been triple-refined and 9 times filtered.

There are many other solvents used though. And people argue about them daily in forums and sites where cannabis users gather virtually to discuss our plant. Some others being liquefied carbon dioxide (C02) and some even rave about hexane.

Now, as with the extraction method used with mash of olive or grapeseed or the like, it’s debatable as to the possibility of solvent residues left in the concentrate or oil. I remember seeing a 12 year old doing a school project in video form arguing that hexane left in cheap oils was harmful to our health. And so of course when the product is cannabis there could be residues pulled with the cannabinoids and terpines from fertilizers, pesticides, or nutrients used while the plant was growing.

To avoid this possibility most people do something called ‘purge’ their final product of dabs using a small vacuum chamber. Some people add heat which changes colour and consistency and perhaps even cannabinoid content. I’ve read of others who purge it at very low heat, and still others use very particular saltwater and a bubbler. The impurities want to bind to the salt and so is drawn out over time.

It’s all part of the great debate and the alchemic wonders that are going on in many kitchens by grassroots chemists trying to create pure pain killers, sleep aids, or medicines. There is even a further process of purification called “winterizing” whereby the final product of dabs is immersed in warm ethanol in a jar until they are dissolved. The jar is then put in the freezer to lower the temp of the ethanol thus slowing down the evaporation process and allowing it to pull out the less desired oils and waxes from the dabs. These can foul the taste, and when it’s medicine or purity you’re after, they aren’t good to ingest when burned.

Speaking of burning, many people don’t want to do it. They’re not interested in inhaling smoke. I get that. I’m currently halfway to saving up to buy myself an “Herbalizer”…. the latest and greatest in at-home vaporizers. So these dabs can also be used in a vaporizer or a vaporizer pen that only heats up the product to the point of vapor not smoke. But these dabs can also be eaten. I’m talking ball it up, roll it in sugar, and pop it down the hatch. Cannabinoid therapy doesn’t only come in a brownie y’know! I mean, for some of us, brownies are so yesterday.

Just a little dab will do ya…

I feel it would be remiss to speak about dabs and not give some kind of warning or fore-knowledge about what to expect from a dab vs. a doob. When you smoke a cannabis doobie of dried flowers, much of what you inhale is burning carbon. As trichomes, oils, and cannabinoids burn in a doob, so too does the plant matter. Now let’s take that further and understand that concentrate has no organic matter in it at all. It is truly the concentrated cannabinoids, terpines, and oils … in a glob that can be eaten, vaped, or burned.

I once likened the process of making concentrate as a “Sap & Maple Syrup” scenario. Whereby it takes a lot of sap to make a little maple syrup. Sap is a slightly sweet excretion from the Maple Tree. When you boil it down slowly over time, the sweetness increases as the extra stuff boils off. Such is the process when making dabs. All of that extra ‘burning stuff’ that you normally would inhale, is gone and all you ingest is active ingredients or medicine.

For someone who is new to this concentrated form of cannabis, it can be too much. I’m about full disclosure and I will always try to be real. The butane process is a cold one so it’s said that it pulls mostly THC and some CBD. Please if any of you know different than this, educate me.

“My buddy THC can be a bit much for some peeps.”

My buddy THC can be a bit much for some peeps. A friend once told me that a dab evoked sadness and negative self-reflection. Ironically, that description is similar to the how man-made THC makes some people feel in studies. It is too cerebral for some.

And then I heard of a friend of a friend who had a dab, got up to leave, said his goodbye’s and left his friend’s apartment without his shoes. This stuff is effective … so be sure you’re ready for the effects.

Photo courtesy of: Ed Rosenthal – From the best seller: Beyond Buds