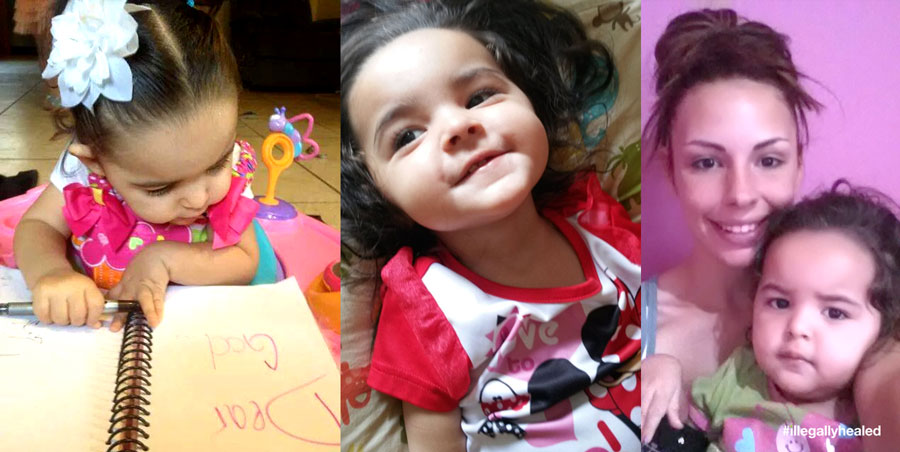 Dear Ladies of The View,

I was completely outraged and heartbroken over the segment I watched yesterday. I was furious when I learned that a mother may be facing jail time for giving her son cannabis oil.  I was in tears at the thought of her precious boy being denied access his life saving medicine. Seizures are deadly… and a nightmare that I live with every second of every day.

I know first hand that cannabis is a life saving medicine that works as I too have a two-year-old daughter who’s life depends on it every day. Her name is Jaqie Angel Warrior.

In January of 2013 at 5 months old she was diagnosed was diagnosed with a deadly form of epilepsy due to a very rare genetic disorder in which there is NO CURE. Before that she was the most perfect baby in the world. I have three other children and nothing about Jaqie was ever any different. Until all out of nowhere, she had her first seizure.

Once the seizures started they never stopped. Jaqie Angel was having 150+ seizures everyday. She was in a constant fight for her life. Over 25 hospital stays from January 2013 to April 2014 and with each passing day Jaqie had less and less life left in her eyes. As parents we were more desperate than ever to find a treatment that would help our daughter and our hope was fading fast because despite trying over 15 AED’s, the ketogenic diet which almost killed her and ACTH injections with huge needles made from dead pig carcasses nothing worked.

We were doing more harm than good to our child. The seizures were taking everything away from her, her development, her vision, her ability to communicate and there was nothing else left we could do for our daughter. She was diagnosed legally blind in November 2013 due to CVI which basically means her brain could no longer process what her perfect eyes could see because there was too much seizure activity. That really broke my heart. I remember picking myself up off the doctors office floor in tears and so angry that my daughter was having to endure so much. The only thing the seizures hadn’t stolen was her life and I knew that any seizure could kill her at any time.

Statistics show that over 50% of children unfortunate enough to be born with this genetic disorder do NOT SURVIVE past their first year of life. Jaqie Angel was lucky enough to make it till her first birthday but she was in very bad shape, very lifeless and we were on the verge of losing her. I was in a constant fight to keep her alive through the constant fear of her dying…hard to do both but my fear of losing my baby motivated me to fight that much harder and find a treatment.

That’s when I learned that other Moms were using Cannabis oil and I immediately approached my daughter’s pediatric neurologist, Dr. Amy Stauffer and discussed using medical cannabis for Jaqie. However, cannabis is illegal in the state of Oklahoma so with Dr. Stauffer’s recommendation we took Jaqie and our 3 other children to Colorado temporarily to do a trial of Cannabis on April 12th 2014.

Cannabis oil was working with-in days and two and a half weeks later her neurologist had us back in Tulsa for an EEG to see if there was any improvements. That was the best EEG Jaqie has ever had. She didn’t have not one seizure and her brain had improved dramatically.

Before cannabis oil Jaqie’s brain waves were at a very slowed 2Hz-2.5Hz for over 15 months. After 2 weeks on cannabis oil her brain waves were at a dominant 5Hz and a normal child’s would have been at a 6Hz. This has prompted Jaqie’s Tulsa neurologist to speak out about cannabis being an effective treatment for severely intractable epilepsy. Dr. Stauffer has been with our daughter since the very beginning and with an abundant amount of medical records and proof that cannabis has effectively controlled Jaqie’s seizures better than anything she has ever tried.

In fact, because of the cannabis oil, Jaqie has been weaned off all other AEDs (15 different narcotics) except Klonopin, which is a narcotic she’s been on 3 times a day since she was 6 months old. It has withdraw symptoms similar to that of heroine so it’s a much longer more complicating process to wean.  Surprisingly, the cannabis seems to be controlling the withdraw symptoms of all these other narcotics.

Jaqie is a true success story. She was an empty shell before cannabis and now she can see, she rolls and plays. She has hugged my neck, kissed me, said mama and made me the proudest mother in the world. She plays peek-a-boo and laughs. She cries now, every day. She went 18 months without ever crying…not even tears. No one can imagine that the sound of your child’s cries could be such a blessing or how their laughter and ability to smile is worth more than the moon and stars put together.

Jaqie has less than 10 seizures a day now and has recently celebrated her 2nd seizure free day ever. Looking back at the 1000+ seizures she had each week for over 18 months can makes my head spin. I couldn’t add the tens of thousands of seizures she’s suffered throughout her life and survived through. That’s why my girl is a WARRIOR.

Currently Jaqie and I are living in Colorado without my other 3 older daughters or their daddy. We are all alone, traveling back to Tulsa only for doctor appointments and meeting lawmakers to help bring forth change to the cannabis laws in our state. I have been trying to share our story with as many people as I possibly can. We have suffered in silence for far too long and there are children and people dying everyday who’s lives can be saved by marijuana. I have devoted my life to sharing Jaqie’s Angel’s story and helping others. I will be speaking at a hearing at our State Capitol next month in regards to allowing children with epilepsy in Oklahoma to use cannabis as treatment. I have emailed and wrote to every lawmaker in our State. I am doing everything in my power to help change these laws not only in Oklahoma but nationwide so that not one more innocent life must be lost. 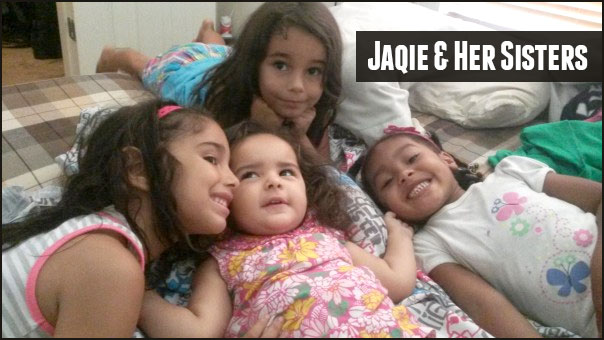 I applaud you for speaking up on this issue and beg you to continue speaking out about this topic. So many lives are depending on it…families are tore apart, people are being locked away in prison for trying to cure their loved ones cancers and treat their children’s epilepsy. It is such a crime our Government is committing murder on those they deny who do not make it through this fight when the real people who are suffering and trying to save lives are being charged with crimes and locked away like criminals. How many times does a mother have to beg “please don’t let my baby die”? Shouldn’t one time be enough to save a life? You would think so but sadly it’s not and I can NEVER come back to my family, my home my life until these lawmakers wake up. I can not afford to keep staying here alone in Colorado away from my family. This is not fair to any of the families these ridiculous laws are affecting. So I urge to please keep medical cannabis in your conversation.

Please help us raise awareness on this issue. And thank you from the bottom of my heart for taking the time to read this letter. I appreciate all your support yesterday and I want you women to know you are a hero to many. You opened a lot of eyes yesterday. You made a huge impact and words can not express my appreciation.

If you want a cannabis success story that you can feature on an upcoming segment I will make myself available anytime.  Have your producers reach out to me… we can even do Skype!

Keep up the fight,

P.S. We are not alone in the fight… Even Jaqie’s little sister is speaking out as you can see below: