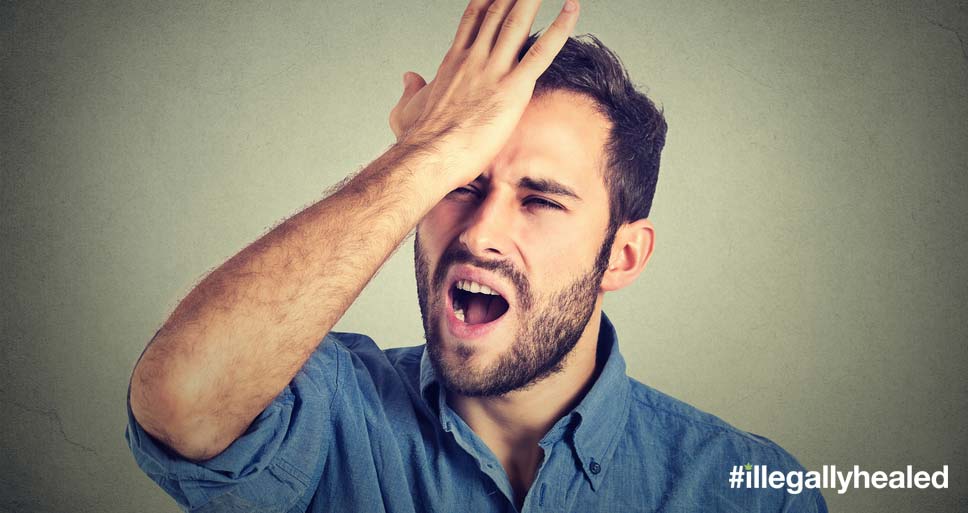 Right now we Americans are pretty divided. The presidential election has torn apart families, friends and communities and divided a nation. It’s disheartening to watch play out live on social media.

Most Americans do agree on one thing though, legal marijuana, because the cannabis plant is perhaps the most useful plant known to man. Medically, it addresses nearly every symptom of every disease, disorder or discomfort. Some varieties of cannabis, known as hemp, provide one of the most sustainable and durable sources of nutrition, fiber, construction materials and plastics. Anybody with an interest has the ability to grow this plant in their own backyard, which is exactly why it is illegal.

On November 8, when the election season finally ends, millions will cast votes in favor of legal medical or adult use cannabis legislation where they live and most will probably pass, because unlike everything else, cannabis isn’t a red or blue issue. It’s a purple and green one.

With so many people coming together over this incredibly useful plant, who exactly would be opposed to the end of prohibition?

Trying to name a singular enemy of cannabis legalization is like trying to identify “the terrorists”. They aren’t necessarily one organized group, but rather a community of affiliated partners and investors with one shared goal. And, until they have a way to shore up their own finances, they will keep blocking cannabis legalization and new medical legislation will prohibit access to the botanical plant.

The ISIS of drug policy is Project SAM, or “Smart Approaches to Marijuana”, led by non-medical doctor Dr. Kevin Sabet, a man who has built a career out of representing these entrenched interests in Washington D.C. and state legislatures. Sabet calls himself the “quarterback of the anti-legalization movement”.

SAM itself is a non-profit with very little funding, but the groups they work with usually receive federal or tax exempt funding status, in conjunction with corporate donations from pharmaceuticals and other for-profit interests. Project SAM uses money from industries that support those nonprofits who also received federal funding to oppose citizen-led initiatives all over the country—think of it like a reach-around into taxpayer money for legalization opponents to try to defeat laws that hurt their bottom lines.

For the most part Project SAM is ineffective, but in the 2016 election desperation they are aggresively trying to block initiatives in Florida, California, Nevada, Arizona and Massachusetts. This year they have been telling some especially egregious lies in their quest to defeat legal access to the cannabis plant. We at Illegally Healed have attended events in Little Rock, Arkansas where medical is on the ballot and Las Vegas, Nevada, where adult use legalization is on the ballot. And, earlier this month, they came to San Luis Obispo, California, where adult use legalization is also on the ballot– we were there and we have aggregated the biggest lies they are telling now.

This year, they are playing all the greatest hits; marijuana makes your kids dumb, it makes users uncontrollably violent, leads to mass shooting, harms children in every way possible, uncontrolled potencies are dangerous and smoking it leads to cancer. Paul Armentano of NORML does a great job debunking all those tried-and-true lies and even some newer ones too. And then there is the “gateway theory” which has been disproven over and over yet continues to be a central theme of Project SAM and their affiliates.

This year, these are some of the most egregious lies they are telling:

In campaigning against two citizen-led initiatives to legalize medical cannabis in his state, Arkansas Surgeon General Dr. Gregory Bledsoe claimed marijuana makes men grow breasts. His source? His “friend” who is a plastic surgeon in Colorado.

“He used to do one to two male breast reductions a year, before [legalization] passed. Now, he does anywhere from one to two reductions per week,” Bledsoe told Arkansas press last week.

Let’s dissect this, it’s important to the rest of the lies to follow. First, who is “the friend” and where are all these men who had to have their marijuana breasts removed?! Besides them not existing, the concept that marijuana makes men grow boobs could only be based on one of two stupid unscientific theories. On its face, it’s an unproven and ridiculous statement that any ethical medical professional would not make, let alone a state’s surgeon general.

The first theory would be that marijuana makes people fat, which in men would cause them to grow breasts. Cannabis does not cause obesity, processed, junk and fast foods do. Even though cannabis can cause increased appetite in some users, scientifically speaking it cannot possibly lead to obesity. Incidentally, cannabis users are more likely to be thinner than non-users anyway.

The second theory would be that somehow the chemical compounds in cannabis make otherwise healthy slender men grow breasts. If this were true, it would also be true for women. If this were true, women who wanted larger breasts could skip the implants. If this were true, transgender women could skip the hormones and/or surgery and just smoke marijuana. But, there is no way this could be true and Dr. Bledsoe either already knows that and is lying or is a poorly educated medical professional not qualified to speak to the effects of any substance.

But without even bringing science into the mix, let’s look at history. Humans have used cannabis for 10,000 years. Men in Colorado certainly have been using high potency modern cannabis before legalization. If marijuana made any humans grow breasts it sure wouldn’t be a new phenomenon.

Yes, marijuana is more potent than it was in the 1970s. Apples are sweeter and grain-producing crops are higher yielding than they were before humans began selectively breeding them. Throughout time and civilization plants and humans evolve to adapt to their settings and humans have bred plants and animals to better suit their needs.

In the case of marijuana, it has been bred to be used as a food, fiber, fuel and medicine– pretty impressive for one plant. Today’s cannabis flowers sold in legal markets are absolutely more potent than 40 years ago. When cannabis was relegated to closet growing and secretive black market deals, it was more efficient for traffickers to make their product as potent as possible.

In the 1960s, researchers first identified THC, dubbed it the “active ingredient” in the plant and declined to look at any of the other naturally occurring compounds. THC has been synthesized into a Schedule III drug, Marinol, which has side effects not caused by pure botanical cannabis.

The high levels of THC are how we have discovered its ability to shrink cancerous tumors. The higher levels of THC mean we can grow more medicine with less plants. There is no proven danger of using too much botanical THC because it is non toxic. It’s simply more efficient.

In fact, THC is very similar to Anandamide, an endogenous cannabinoids produced in the body that functions like and has similar effects to THC. Anandamide is released naturally in humans from exercise.

3. Marijuana is bad for the environment

The saddest thing about this lie is that if any of the people telling it actually cared about the environment we probably wouldn’t be facing all the crises being caused by climate change.

Cannabis is a plant, one that is a renewable source of medicine, fiber, fuel and plastics. The hemp plant actually remediates radiation. You know what’s worse for the environment than growing cannabis? Oil and gas exploration and nuclear meltdowns such as the one at Fukushima in Japan.
Growing cannabis is bad for the environment when it is forced by prohibition and regulation into hiding. Indoors cannabis is grown with high-power lights that consume large amounts of energy. Outdoors, black market growers illegally dump generator oils, fertilizers and pesticides into waterways.

The idea that a naturally occurring plant– one that converts carbon dioxide to oxygen– is bad for the environment is like blaming climate change on farting cows and not the business interests that scaled up beef production to unsustainable levels in the first place.

If any of the people who repeated this lie actually cared about climate change they wouldn’t be focusing their efforts on “keeping other people safe” from a non-toxic plant.

4. Marijuana is to blame for the homeless

Recently, I listened to an anti-legalization speech from Jo McGuire in Las Vegas. McGuire works for the Drug and Alcohol Testing Industry Association (DATIA), a group that profits heavily off government regulation that mandates drug testing as a condition for employment.

Besides saying crazy things like “sativas are like cocaine” she blamed pretty much every crime in Denver on the homeless and then blamed the homeless on marijuana legalization. She painted a pretty vivid picture of homeless lurking the streets like zombies, threatening and terrorizing the good upstanding citizens of Denver.

I emailed her so I could get a look at her stats. We went back and forth and she admitted to me all of this correlation– which was central to her talk– was hinged on one report from one homeless shelter in Colorado that claimed in one feature news article and one powerpoint presentation that one-third of the homeless were self reporting that they were “moving for pot”. She called this “statistics”.

A central tenant of Project SAM is that pharmaceuticals derived from the cannabis plant is the safer, saner route to utilizing the positive effects of cannabis.

Not only has this already been debunked by the 30-year history of Marinol and the discovery of the “entourage effect”, this concept is key to Project SAM’s motivations. They are, in an indirect way, being funded by pharmaceutical companies.

This is a dangerous lie, because real people are using real pharmaceuticals with really dangerous side effects. They could be consuming a safer plant instead.

“Medicine probably shouldn’t be voted on, it should go through some sort of scientific system,” Kevin Sabet concluded at his $80-a-ticket forum in San Luis Obispo, California.

This comment conveniently forgets that cannabis is a part of nature, it should have never been made illegal in the first place. It’s not some designer drug or pharmaceutical invented in a lab.

Where Kevin and I agree is that Big Marijuana is real and trying to write the laws in many states. What he again conveniently forgets to mention is that he is trying to “pump the brakes” on botanical cannabis access to make room for Bigger Marijuana (aka pharmaceuticals).

All of the lies Kevin and the terrorists are telling hinge on the notion that cannabis hasn’t been an essential part of human civilization from the beginning, tens of thousands of years before American corporate-backed drug prohibition. It’s always been here and always will be, regardless of any law.

In ending his speech, he reassured the room, “you are on the right side of history. [The others will see], I guess sometimes we have to burn our hands off to learn the stove was a little hot,” Sabet concluded.

The stove was never on.