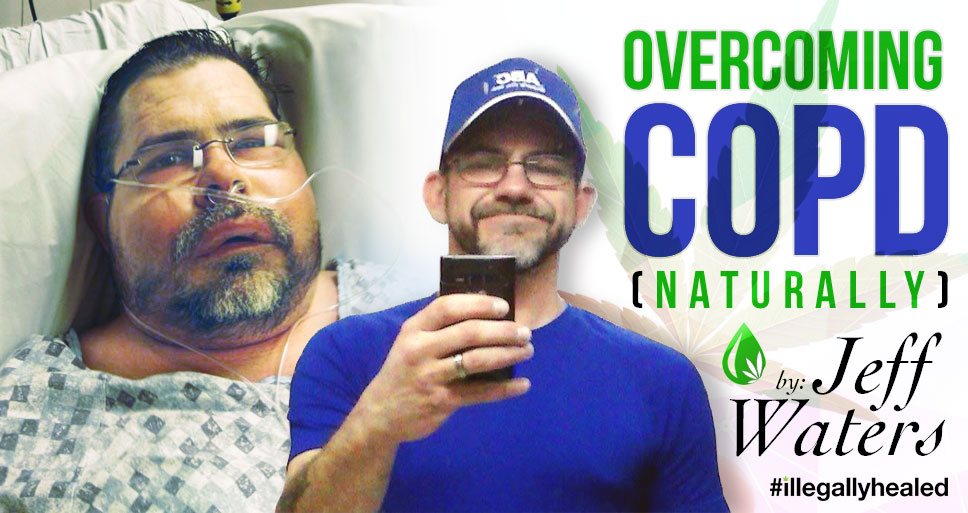 I remember when I was first diagnosed with COPD. Back then, there were no commercials for COPD medications. I had never even heard the term Chronic Obstructive Pulmonary Disease. It was a shock to say the least!

You see, I was considered pretty healthy up to that point. I was in good shape, except for the occasional bronchitis, which in hindsight was a red flag that was missed for quite awhile.

Almost 8 years ago, this journey into dealing with a progressive disease with no cure began. It was also the start of a long journey with physicians and the healthcare industry. First off, my doctor never really explained COPD to me. Most of my knowledge came from research online, books, and eventually social media outlets.

My nightmare with conventional medicine began quite simply with me complaining to the doctor that I was getting short of breath. I asked for something to relieve this symptom. The answer was a small little inhaler called Proair, a rescue inhaler that little did I know would end up being in my pocket at all times. That medicine seemed to work well for awhile, until I noticed having to use it more and more. 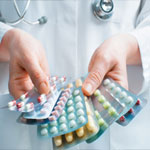 “The doctors’ answer was antidepressants.”

When I complained to the doc, his answer was more inhalers! This time it was Spiriva and Advair. Both are long acting bronchodilators so unfortunately unlike the handy little rescue inhaler these were to be taken regularly. Big pharma was starting to sink its teeth into me.

At this point the doctor was throwing all kinds of medications at me without addressing the issues causing the symptoms. For example, I was depressed… you would be too if you saw no future except getting worse and dying. The doctors’ answer was antidepressants like Prozac, and anxiety medications like Ativan.

As my disease progressed I started to gain a lot of weight, and at 5’6 I am not a large man. Each time I complained about breathing issues the answer was adding more medications to the mix. Over the next 8 years I just kept declining. It got so bad I could no longer work because of the disease. I filed for disability and relocated back to my home state, basically to die!

I was miserable, overweight at 190lbs, dragging an oxygen tube around and eating pharmaceutical medications all day long. At one point I was on 22 different meds!

The date that would change my life and lead me to become a medical marijuana patient. I woke up and noticed a little swelling and discomfort around my sinus region. I believed it was a sinus infection and brushed it off as nothing.

Over the next 24 hours my face started to swell more, so my wife took me to the closest emergency room. The doctors really didn’t do much of an examination. They just accepted my word that it was a sinus infection, gave me Benadryl, and sent me home.

The swelling got worse, so we went to a different emergency room. They gave me some antibiotics, treated me with COPD medications, and sent me home. When I woke up the third day, I looked like I had been in a 10 round boxing match and lost! My eyes were so swollen I was having trouble seeing, and I was very foggy in the brain. 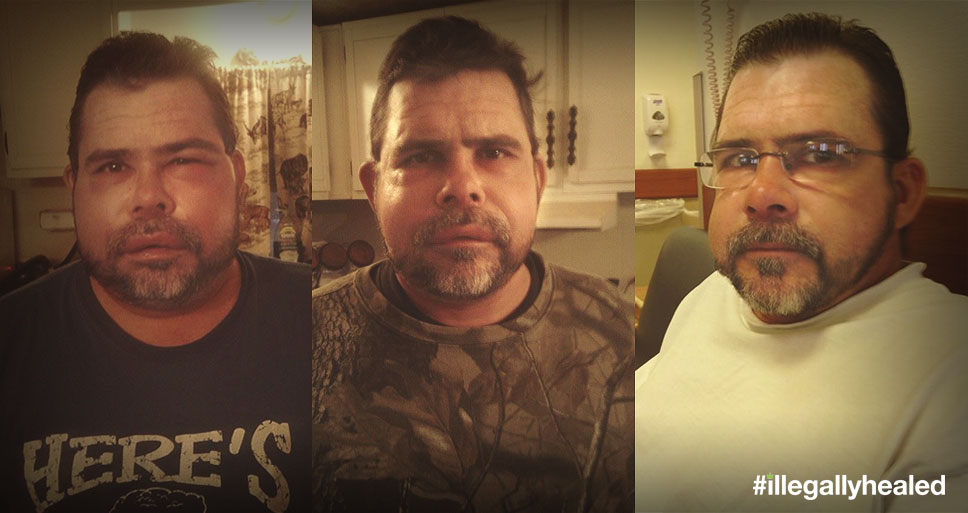 My eyes were so swollen I was having trouble seeing.

My wife rushed me to a hospital an hour away. The doctors did a big work up and found I was having an allergic reaction to Lisinopril, a blood pressure medication I had been taking for years. I also had pneumonia. The doctors said if we had waited another 24 hours, I would have been dead! They had to put me into a medical induced coma, as well as attach a ventilator because my lungs were in such bad shape they could not do the job on their own at that point.

I would end up spending 28 days fighting for my life. When I did start to recover and learned exactly what had happened, the doctors advised me that I should stop taking many of my COPD medications because of the high risk of pneumonia. Frankly, they said if I got pneumonia like this again I probably wouldn’t make it! These doctors were young doctors fresh out of med school from overseas. They prescribed me vitamins and healthier options, which I liked.

When I finally got home I started researching alternative methods of treatment for COPD. I did a lot of research and joined COPD groups on Facebook, where I found one lady close to my age that said she cured her COPD with cannabis oil! I started researching this treatment method, but couldn’t find any information directly related to COPD. I did find it seemed to cure many diseases and ailments, so I decided I would try it. I knew through my research it couldn’t harm me, and I had nothing to lose. 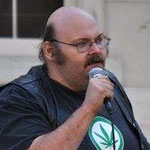 I figured I would be able to find it even though it was illegal, but nobody I asked had heard of it. Then I found a man online named Ronnie Smith, aka Roland A Duby. He said he could send me a sample to try. I got it, and the first time I had a dose, it was relaxing and opened up my lungs like they hadn’t been in years. I knew I was on to something!

Ronnie continued to treat me up until his death. As I was treating myself and feeling better, the oil was actually giving me energy so I started doing more exercise. I was seeing positive results, so it was time to go all in! I changed my diet, increased my dose of cannabis oil and began walking 2-5 miles a day. Now in March of 2015, 2 years from the allergic reaction incident, I have lost 50lbs, I no longer take any pharmaceutical or over the counter medications, and I am in the best shape of my life! 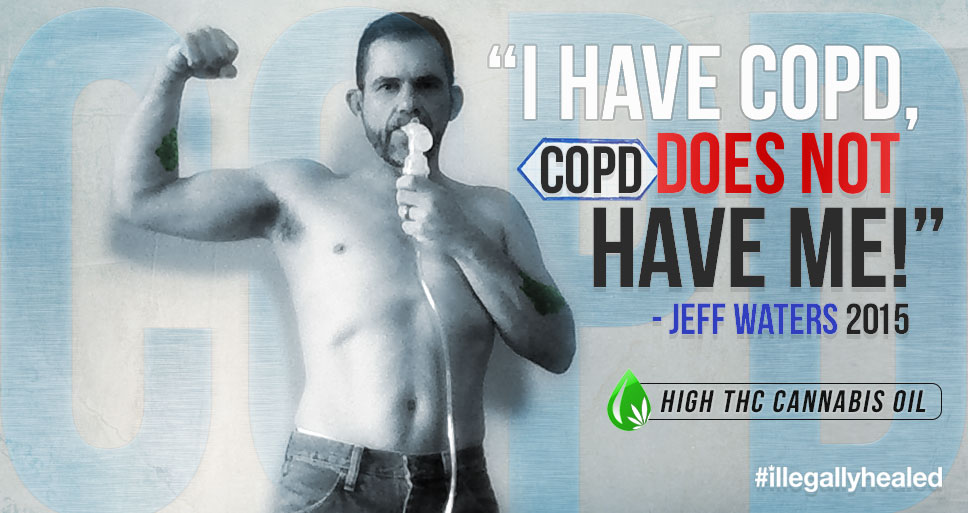 I now dedicate myself to reaching others that suffer from COPD with the message of hope and healing. I run a private COPD group on Facebook with almost 3000 members. I also have public information on my general COPD profile page.

People always ask me – how did I do it? It’s simple – cannabis oil, diet, positive, lifestyle changes and exercise! That’s all I really did to achieve my recovery, and I know many others can do the same.

#illegallyhealed provides a community forum for patients to share their story about using a medicine that has been approved in over 23 states around the Nation. From time-to-time we have paid and unpaid guest bloggers post on our site.

The views, opinions and positions expressed within these guest posts are those of the author alone and do not represent those of #illegallyhealed or Advocate Media Group LLC. The accuracy, completeness and validity of any claims or statements made within this article are not guaranteed. We accept no liability for any errors, omissions or representations. The copyright of this content belongs to the author and any liability with regards to infringement of intellectual property rights remains with them. 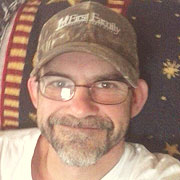 Jeff Waters is a medical cannabis activist and has a first-hand knowledge of the healing properties of this natural medicine. Jeff has presented before legislators, media, and the public. Jeff is part of Oklahomans for Health. He's @jeffwaters1972 on twitter.