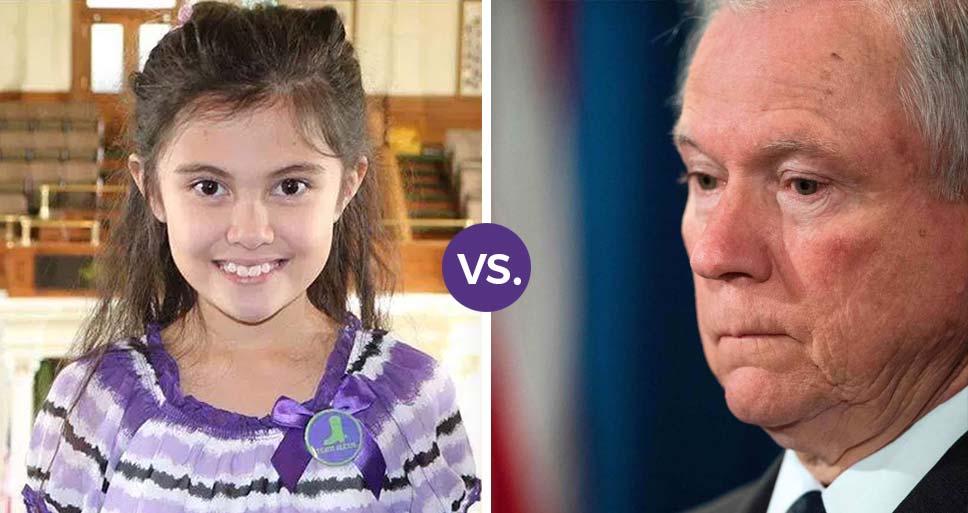 “Beleaguered” Attorney General Jeff Sessions was named a defendant today in a federal lawsuit challenging the constitutionality of the Controlled Substances Act as it pertains to Cannabis/Marijuana. In a 90-page Complaint, attorneys representing five plaintiffs maintain that the CSA, in classifying Cannabis as a “Schedule I drug,” is so irrational that it violates the U.S. Constitution.

In their Complaint, plaintiffs demonstrate that the Federal Government does not, and could not possibly, believe that Cannabis meets the definition of a Schedule I drug, which is reserved for the most dangerous of substances, such as heroin, LSD and mescaline. By way of comparison, cocaine and crystal meth are considered Schedule II drugs and are thus considered less addictive and less dangerous.

To be classified under Schedule I, a drug: (i) must have a high potential for abuse; (ii) must have absolutely no medical use in treatment; and (iii) cannot be used or tested safely, even under strict medical supervision. The plaintiffs point out that the Federal Government knows that Cannabis does not meet these requirements, especially given that, among other things, the Federal Government: (a) obtained its own medical patent based upon the Federal Government’s assertion that medical Cannabis is a safe and effective treatment for Alzheimer’s Disease, Parkinson’s Disease, and HIV-induced dementia (among other conditions); (b) established a national policy to refrain from investigating and/or prosecuting medical Cannabis businesses and users in the 29 States and three other areas under American jurisdiction (including Washington, DC) that have legalized Cannabis for medical and/or recreational use; (c) provided instructions, through issuance of the FinCen Guidance, on how financial institutions can bank Cannabis business; and (d) admitted that Cannabis does constitute medicine, including through statements by the U.S. Surgeon General and a Federal Administrative Law Judge.

Among the other claims in the lawsuit are that the CSA: (i) was enacted and implemented in order to discriminate against African Americans and to suppress people’s First Amendment rights; and (ii) violates plaintiffs’ constitutional Right to Travel.

Lauren Rudick, a member of Hiller’s firm representing Cannabis businesses, observed that, at present, “more than 60% of Americans live in a jurisdiction in which medical Cannabis is legal.” She also remarked that a “4/20/2017 Quinnipiac poll found that over 90% of Americans support the use of medical Cannabis – and it’s near impossible to get 90% of the Country to agree on anything.” These numbers led Joseph Bondy, a federal criminal defense attorney and legalization advocate working as co-counsel with the Hiller firm on this case, to “question the agenda of those who continue to push for enforcement of the CSA, given its unlawful and discriminatory impact and that so few in America support such an effort.”

The defendants in the case are Attorney General Jeff Sessions, Acting Administrator of the DEA Chuck Rosenberg, the Justice Department, the DEA and the Federal Government. Co-counsel David Holland, a litigator and longtime advocate for legalization of Cannabis, noted that the “the efforts to criminalize Cannabis are relatively recent and were largely underwritten by racial and ethnic animus.” As reflected in the Complaint, African Americans and other Persons of Color are four times as likely to be arrested under the CSA than white Americans, even though Cannabis is used equally by People of Color and Caucasians.