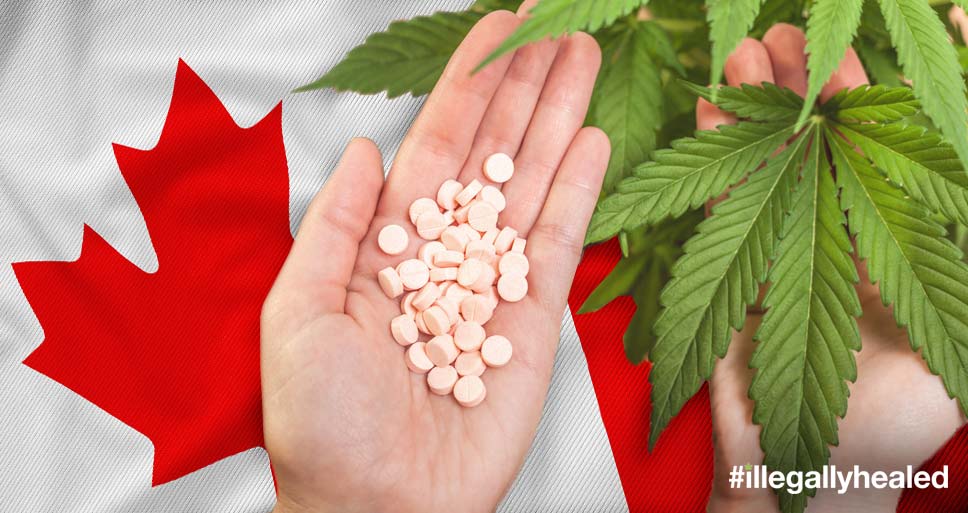 “Back in my day if you wanted to be with the pretty girls, ya stayed away from the drugs”, says my buddy Art. He’s explaining to me how crazy it is that today he uses Cannabis and Cannabis alone for his chronic pain.

After the accident and the subsequent leg amputation, Art took whatever pain pills the Doctors would give him. The pain was unbearable. When finally, after almost ten long years of killing the pain with opioids, Art found out there was something else he could try if he was willing. Some people may call him a druggie. But at this point with the addiction to the nauseatingly zombifying pills, he didn’t much care what anyone thought.

One night he was at a buddy’s house when it came time to take his meds but he’d forgotten them at home. With much hesitation Art agreed to eat half a Cannabis infused ginger-snap cookie. He breathed deeply as the Cannabis smoke his friends exhaled lingered in the room, and sat amazed. For hours. Pain-free.

Unfortunately, the health care industries worldwide, don’t see what Art sees or what I see or what millions of Cannabis users worldwide know. Health Care industries are heavily influenced by the makers of those zombifying pills. They think Art should just keep on taking those pills day after day after day. There’s a very good reason why a huge portion of patients who are taking opioid pain medications will do anything to stop taking them.

I’m a call-taker at a cannabis clinic and I speak to patients every day who’s main motivation for calling me, is to stop taking so many pills. And not just one kind of pill. With the average senior on at least six different prescriptions, it’s a full time job trying to organize them all. Each with their own long list of side effects. Swallowing that many pills alone can be an ordeal! And they go down into our stomachs wreaking pain and havoc, sterilizing gut microbiome hindering proper digestion and nutrient absorption.

The side effect from the one pill soon requires that you take another, and before long you don’t even feel human! It’s no wonder the right to smoke our medicine has been of foremost importance to we patients. A million bleeding stomach ulcers challenge the theory that pills are the best mode of ingestion every day.

The Fight Is Not Over Yet

Safe ingestion of cannabinoids is of huge debate in the medical system and has been for years. After they deemed smoking unsafe, we came up with vaporization, an inhalation method much like an asthma inhaler. Vaporization offers no risk or damage to the lungs and yet it too is deemed too risky to be allowed in-hospital. Ironically, cannabinoid vapor would likely be the only medicinal compound under a hospital roof with a zero death toll.

A new friend of mine has fibromyalgia at the young age of 23. She recently read about cannabis and how it’s helping others with her condition. The pain is so severe that her GP has prescribed her a 50 mcg and now a 75 mcg Fentanyl patch which she refuses to use. But getting approved to use medicinal cannabis under the age of 25 is a heavily scrutinized process to say the least. The theory being that the human brain isn’t finished growing until 25 and they fear that cannabis may hinder proper development. But … a 75 mcg Fentanyl patch is okay for the growing mind?

What About The Kids?

What about Benzos for children? Or Ketamine, a horse tranquilizer! These are common meds for seizure disorders in children. Why do we trust that Adderall (amphetamine) or Ritalin (methyphenidate) or Dexedrine (dextroamphetamine), all of which are prescribed to children aged 3 and older, are safe for the growing mind?

I myself was given Lithium at 20 from my pill-pushing doctor, along with the Proz@c he’d talked me into months before. So, a SSRI whose action is only THEORIZED is safe for my young brain but this unprocessed plant is not?

Do YOU believe that? We’re far too often told what to believe, especially when it comes to pharmaceuticals. Challenge that whenever you can!

Use Amongst Seniors is On The Rise

Another new friend aged 74 with severe arthritis has also been easing her pains with cannabis oil. She remembers the first time she asked her long-time GP about medicinal cannabis. She was tired of the morphine and how barfy and loopy it made her feel. It hindered her ability to be active in her community as she didn’t feel safe driving on it though there were no driving precautions on the bottle. She asked her doctor and he simply stared at her quietly, and then making a notation in her file, he dismissively said, “No, you’re fine with the morphine.” End of discussion. Too many discussions end this way. Too many of us are ignored or intimidated into prescription compliance. The patient-doctor relationship should not be akin to bullying!

We’re seeing a real shift in healthcare right now, especially where cannabis is concerned. This plant and the personal freedoms its use requires is shaking the very foundations of Western medicine. Humans everywhere are weaning themselves off of their pills and choosing cannabinoid therapy instead. Who says safe medicine only comes in a pill?

I personally medicate myself in many ways. I take oil I make myself out of my legal cannabis. I smoke doobies and bongs too. I use a discreet portable vaporizer when I’m on break at work. And every day I’m learning more ways to get it in and get it workin’!

So before any of us judge the legitimacy of anyone else’s cannabis use, we need to ask one question:

What pill is cannabis replacing?