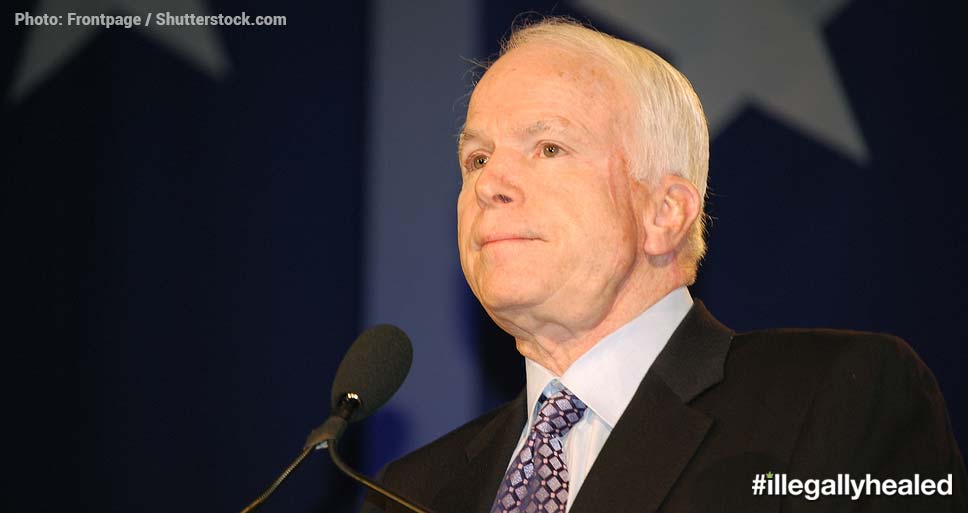 In the fall of 2013 I began working with Dr. Sue Sisley raising awareness and support for her research studying the safety and efficacy of cannabis when used to treat treatment-resistant post traumatic stress disorder (PTSD). When Dr. Sisley was fired from the University of Arizona we found ourselves abruptly going from a friendly, cooperative working environment within the university and Arizona’s political halls of power, to an adversarial one overnight.

I started a petition shortly after the firing to hopefully get Dr. Sisley hired back at the University of Arizona so that she could conduct her research. That failed. Next, the petition went to “leaders” within the state of Arizona, asking them to identify a place where this research could be conducted. That also failed.

It was at this point that I first contacted Senator John McCain’s Arizona Chief of Operations and Outreach about this issue, Mr. Rick Stilgenbauer. I asked him directly if his boss would be weighing in on this issue to support the Veterans demanding cannabis research. He told me I didn’t have enough “political chits” to pull a request like that. Besides, he said, McCain “doesn’t want to get anywhere near the issue of cannabis right now.”

While I was pushing the research angle, I was simultaneously working with Nurse Heather Manus, and Ken Sobel of the Arizona Cannabis Nurses Association. Their initial petition to add PTSD was denied outright by the Arizona Department of Health Services, and was followed up by an appeal in 2014 which successfully added the qualifying condition to Arizona’s Medical Marijuana Act (AMMA). All of this information was relayed to Senator McCain’s team.

A year later, on February 13th, 2015, I sent an email to Mr. Stilgenbauer containing a letter signed by twenty-two Veterans from Arizona, and containing 15 pages of comments and concerns from citizens of the Grand Canyon State regarding the stalled PTSD study. I again to asked for McCain’s support on this issue. I was politely thanked for sending the letter and was informed that my correspondence had been sent to McCain’s DC staff. Never heard back from either office.

Another year later and I’m sitting in my weekly meeting at the local Social Club when one of the Veterans comes in talking about an event for McCain he was just at. The event, held at a local bar, was to raise money and support from Veterans in the Tucson area. When McCain was asked where he stood on the issue of Veterans seeking access to cannabis, he “pretended as though he had no idea that there was even a problem.” McCain said he was “shocked.”

Well, this little tidbit of information prompted me to write yet another letter to Mr. Stilgenbauer, upon receipt of my letter, he advised me to send the letter to McCain himself.

I hope this finds you and yours well and off to a great start for the week.

I wanted to share a petition with you again. As a reminder, this has been live now for over two years and has collected over 100k signatures from concerned veterans, family members, care takers and supporters of veterans receiving cannabis as a recognized treatment option within the VA.

Initially this was addressed to President Ann Weaver Hart, then the Arizona Board of Regents & Governor Ducey, calling for the reinstatement of Dr. Sue Sisley at the UA so she could conduct potentially life saving research. Over the years, it has also been addressed to various officials within the White House Office of National Drug Control Policy, and now, President Obama himself. Based on existing research, we are now demanding safe access to this medicinal herb.

Given your status as a decorated war veteran, your position within the United States Senate Armed Services Committee, and your long standing history of supporting our nation’s men and women who have served our country, I would like to discuss this issue whenever it is convenient for you. What we really want, what we are also demanding, is your public support on this issue.

If you want our vote, Sir, that’s the only way you’re going to get it. Otherwise, our message is that you’re only using veterans to get re-elected.

Thank you for your time and consideration, I look forward to hearing back from you soon.