Tears rolled often at a Public Health Committee hearing on Tuesday night in Texas as legislators heard testimony on a medical marijuana bill.

Parents, patients, doctors, veterans, a county commissioner from Longview, self-described conservative Christians, and many other Texans testified in support of House Bill 3785, which would fully legalize medical marijuana for use by those with seizures, severe pain, and multiple other conditions. If passed, the program would be implemented in 2016 by the Department of Health and Human Services.

Patients would be protected from losing their jobs for testing positive for marijuana, but would be prevented from consuming or being under the influence of it while at work.

Michael Rains, a terminal patient who also suffers from severe seizures, was the first in a long line of heartbreaking testimony.

Rains went without dialysis for that day in order to attend the hearing, and stated that even if it causes him to end up in the hospital, being at the hearing to support medical cannabis was more important.

His doctor advised him to move to Colorado, and for a time he went there and found relief, however now back in Texas, he suffers severe debilitating seizures, which terrify his two young daughters.

Barbara Humphries, a 31-year-old patient with Stage 3 breast cancer, had many openly crying as she told her story about enduring a double mastectomy, nine months of chemotherapy, and the struggles which accompanied her treatment, including nausea and severe pain. She says that medical marijuana made the nausea go away, she was able to eat and regain weight, and her pain was greatly managed by it.

She brought with her a letter from her doctor who expressed shame in not being able to prescribe medical cannabis, and stated that she shouldn’t be made into a criminal for taking a safe and effective medicine. Humphries ended her testimony by asking, “why is it so bad that a patient feels good?”

Dean Bortell (video at top of page) testified in support of the bill as well on behalf of his daughter Alexis, who he says is exiled in Colorado where she has experienced great success through treatment of her seizures with cannabis oil. Alexis suffered a minor seizure after 33 days of treatment due to the flu, which Dean says would have likely killed her in Texas.

Army veteran David Bass and Air Force veteran Clif Deuvall both spoke about their quality of life as disabled veterans who were failed by pharmaceutical pills. Bass, who suffers from PTSD, says that after much research, he ended up flushing his pills in favor of cannabis because it helps him sleep and relieves his symptoms. Deuvall suffered severe injuries during a crash in Vietnam, which led to several surgeries on both legs and an arm, and the loss of an eye. As a patient on methadone, he lost his quality of life and wasn’t able to attend either of his sons’ funerals because he was confined to his bed. He found that medical marijuana was able to get him away from the pharmaceutical drugs, and gave him his life back.

A representative from Republicans Against Marijuana Prohibition, Zoe Russell, gave a very rapid testimony about the need to trust doctors with the ability to prescribe marijuana, and told committee members about Israel establishing a medical marijuana program. She also cited a survey which found that 77 percent of oncologists would prescribe medical cannabis.

David Yang, a doctor from MD Anderson, also testified in support of the bill, saying that it shows promising treatment options for cancer patients, and broke the plant’s effectiveness down to a molecular level. He cited it as being a safe and effective treatment for patients.

Vincent Lopez, who has made many trips to the capitol over the years to support medical marijuana, has been confined to a wheelchair for 25 years due to Becker’s muscular dystrophy. He experiences severe pain and said he was there to express the reality of Texans who experience debilitating symptoms. “I contend with the pain, not the law, and the pain always wins” he stated. Lopez says that marijuana helped ween him off codeine and has drastically increased his quality of life. 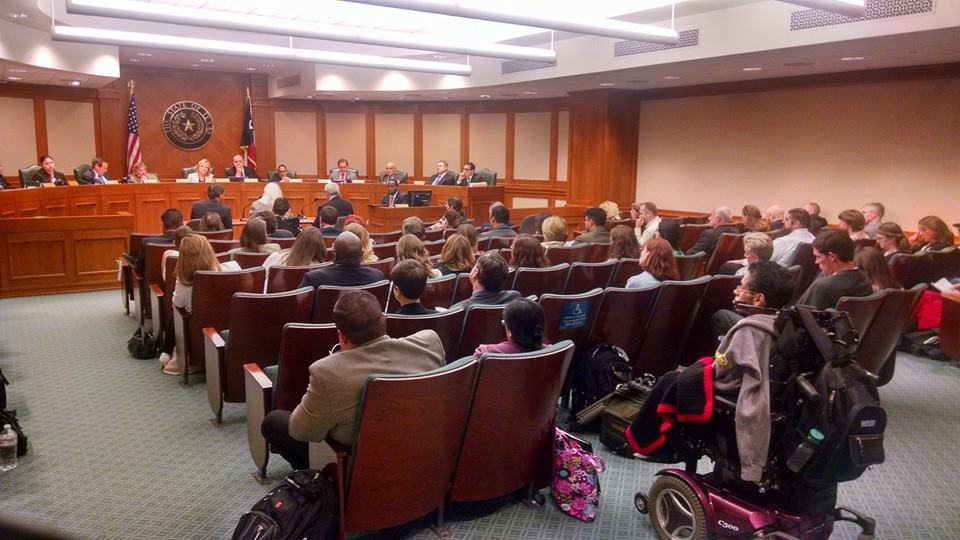 The Public Health Committee heard 6 hours of testimony in favor of a medical marijuana bill on Tuesday, April 28, 2015. Photo by Texans for Responsible Marijuana Policy.

Many parents and grandparents testified on behalf of their children and grandchildren, and how a whole plant medical marijuana program could help ease their pain and increase their quality of life.

John Johnson, a lieutenant fire fighter and medic, along with his wife Rachael, were one of those parents. Their 6-year-old son cannot walk or talk, and began having seizures at 9-months-old. He takes 20 different medicines each day, and still experiences 30 seizures per day. John stated that they have done everything they can, and are about to move to Colorado. He stressed though that they do not want to move, and shouldn’t have to move, because Texas is where their family, friends, support system, and home is. Rachel stated that her son deserves better, and that it’s not easy to just pack up and move.

“Marijuana isn’t something I just thought, let me give that to my child. We did our research,” she told committee members.

Some parents say they’ve been all around the country visiting with doctors, spending much time and money seeking help for their children, who largely suffer from severe seizures among other issues, and they’ve exhausted all current legal options.

A number of people said that they would be forced to move their families to a state where medical marijuana is legal if Texas does not act on a medical cannabis program. “I don’t want to see my daughter regress again,” said one man who saw first hand how medical marijuana helped his daughter. His family plans to move back to Colorado after the school year is over.

Others say that they are unable to leave Texas, and that their children’s lives are in the hands of state legislators.

Over 70 people testified in support of the medical marijuana bill. One organization was slated to likely testify in opposition, the Sheriff’s Association of Texas, however when called they did not come forward. No testimony was given against the bill.

Sheriff William Travis of Denton County, who represents the Sheriff’s Association, has been a vocal opponent of all 11 marijuana-related bills in the Texas legislature. He has previously stated that they oppose any measure which would change marijuana laws in Texas. Earlier in the day, he testified against a CBD-only medical marijuana bill during the same committee hearing.

Jason Miller, the executive director of Houston NORML, testified for the bill and reminded legislators that a failure to vote the bill out of committee would put them in the unpopular position of supporting prohibition and supporting the criminalization of the many parents and patients who testified.

Testimony went on for six hours, and finished up just before midnight.

The bill has been left pending in committee, and it is not known if or when it will be scheduled for a vote.

Also discussed at the same time was House Bill 837, which provides an affirmative defense to patients in court who have a doctor’s recommendation for medical marijuana. This gives a judge the discretion to dismiss charges, or for a jury to acquit someone consuming cannabis for medicinal reasons. Most who testified in support of the medical marijuana bill also supported the affirmative defense bill as well. That bill has also been left pending in committee.

Last year a Texas Tribune poll showed that about 76 percent of Texans are in support of some form of marijuana legalization.

One legislator on the committee, Elliott Naishtat, stated in closing that it would only be a matter of not if, but when Texas will legalize medical cannabis.

This story was originally published on the Texas Cannabis Report. 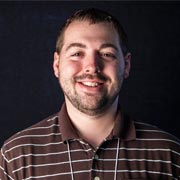 Stephen Carter is the editor-in-chief of the Texas Cannabis Report. Texas Cannabis Report aims to bring you news pertaining to cannabis from across the state of Texas by reporting on events, activism, groups, legislation, judicial issues and more. http://www.txcann.com/