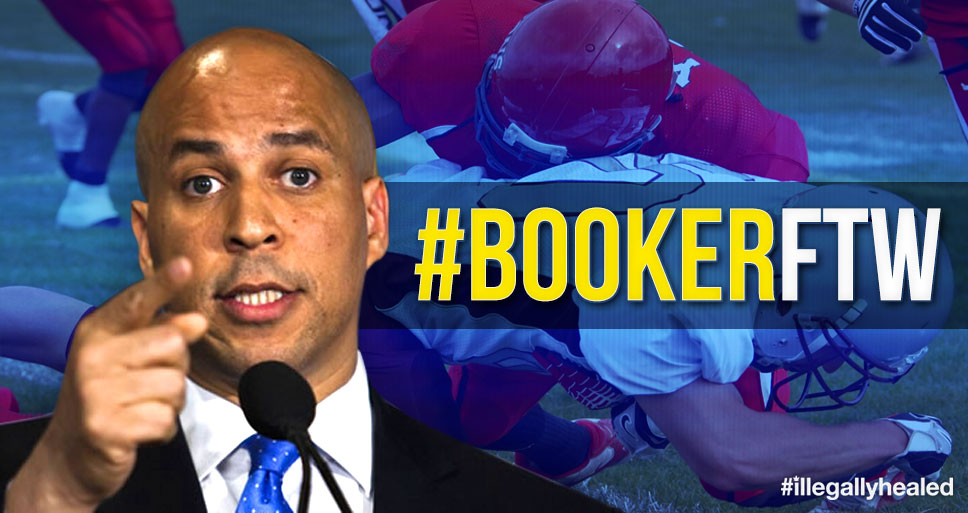 The caucus, which can be replayed on YouTube, addressed the complexities involved with conducting research on cannabidiol (CBD), a Schedule I substance, as well as its potential medical benefits and risks in treating serious illnesses such as intractable epilepsy. 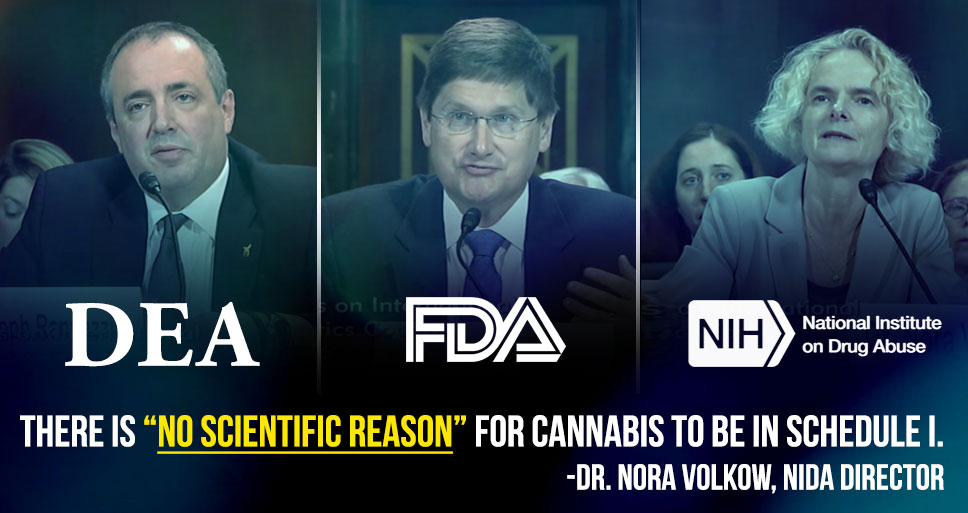 Senator Booker said he was happy the first panel established that there is a choke-hold on cannabis research and reputable researchers cannot procure adequate quantities and types of cannabis. Dr. Volkow from NIDA even concurred that there is “no scientific reason” for cannabis to be in Schedule I like heroin. (1:29:19 mark)

The second and final panel to give testimony and answer questions were John Ingram M.D., Tom Minahan M.D. and Kevin Sabet PhD. Sabet is the founder of Smart Approaches to Marijuana, and has been described as “the quarterback of the anti-legalization movement”. Well, if Sabet is the quarterback then Senator Booker is the linebacker for sick patients who just landed a game changing sack and a pick-six.

Senator Booker asked Sabet a very straightforward question. “What’s the difference between Schedule I and Schedule II [drugs] in your mind?”

Sabet replied that, “It’s actually a very technical difference and a very minor difference and it’s not going to make the difference for research…” Senator Booker, pressed for time, pointed out that the physician and researcher on the panel, Dr. John Ingram, just said it made a huge difference. Sabet quickly changed his tune and replied,

“Schedule II is absolutely easier to research, it doesn’t solve the problem of getting the drugs to folks now. It does not allow you to prescribe it.” -Kevin Sabet PhD

Senator Booker deferred to the physician on the panel who said he actually prescribes Schedule II drugs everyday.

Clearly, it was an optics issue with Sabet, as Senator Booker pointed out that Schedule II drugs are clearly easier for patients to access and for researchers to study. Dr. John Ingram, a practicing physician, swiftly corrected Sabet and said they have Schedule II drugs as part of their practice and that he personally “prescribes Schedule II drugs everyday.”

Will Re-Scheduling Really Make A Difference?

Senator Booker successfully showed how rescheduling cannabis will have a major impact on cannabis research and use. For one, there is a huge difference between Schedule I and the other Schedules – only substances in Schedule I have “no accepted medical use”. Therefore, moving cannabis to another Schedule formally codifies it as a medicine in the United States. This will not only simplify access to cannabis, but will stimulate more interest in it by research institutions.

Furthermore, cannabis could finally be prescribed as a legitimate medicine, rather than just “recommended”, an action which only exists due to the Schedule I nature of cannabis. In addition, moving cannabis out of Schedule I would end the NIDA monopoly on cannabis for research purposes. While cannabis should arguably be treated as a nutraceutical and be entirely removed from the CSA, moving it to a lower Schedule is a step in the right direction.

Kevin Sabet says the CARERS Act is a red herring by the legalization movement.

One thing is for sure – The CARERS Act is not a red herring by the legalization movement, as Sabet arrogantly suggested. After that statement, it was easy to see the disdain in Senator Booker’s eyes, given that he helped draft the legislation and most completely understands its intent. The CARERS Act is meant to both enable access to cannabis by individuals throughout the country, including Veterans, as well as ease restrictions on research. It has nothing to do with the recreational use of cannabis.

Those who stand against medical cannabis have no understanding of the experiences of real patients. Millions of patients are finding that smoked or oral ingestion of THC-rich and/or CBD-rich cannabis has profound results. Some are seeing complete remission from their diseases, in cases where pharmaceuticals not only did not help, but made conditions worse by causing debilitating side effects.

The resistance to cannabis medicine by uninformed individuals is clearly the product of long-term ignorance and stubbornness. Thankfully, people from all levels of society, including United States Senators, are starting to understand the value of cannabis as a medicine, and are taking action to ensure it is made available.

Watch the epic takedown of Kevin Sabet below. It’s only 4 minutes but may just be the best 4 minutes of your day…

Do you support the rescheduling or descheduling of cannabis? Tell us what you think about Senator Booker vs. Sabet and share this on Facebook.