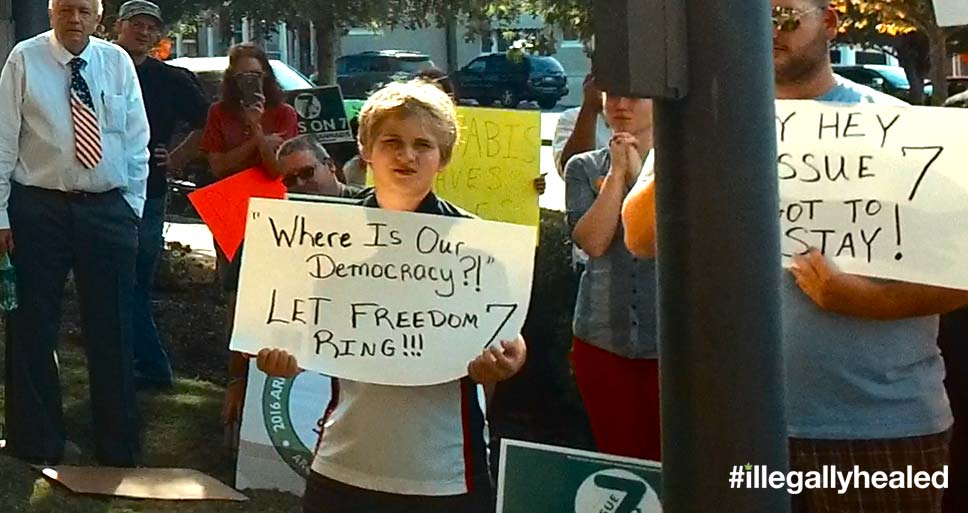 Someone, anyone, please help… The rights of sick and dying patients, medical cannabis, and more importantly, DEMOCRACY is under attack in Arkansas. (check out exclusive video below)

The decision was NOT unanimous and there are two justices that agree Issue 7 should remain a valid Issue on the 2016 election. The decision has been called unconstitutional by many, including Steve Isaacson running for Congress in the 3rd District of Arkansas.

“My campaign manager has been diagnosed with Parkison’s disease and she could use cannabis and it could help her. Even her doctor says cannabis could help her. So we need to get this turned over like it’s supposed to be because it’s  completely unconstitutional.” -Steve Isaacson, Candidate for Congress (3rd District of Arkansas)

Here’s what it looks like at a protest for democracy:

Arkansas Supreme Court Blocks Medical Cannabis VoteIs this what democracy looks like? Should this be overturned?
Please watch & share → Let’s get Millions of eyes on this!
#illegallyhealed #Arkansas #SaveIssue7 #Democracy

“This is something that if we don’t stand up for this now, they can do this to us in the future. It is not just Issue 7 that is in danger, it is democracy in danger.” -Julie Norris Yell

UPDATE: A petition on behalf of Arkansans for Compassionate Care has been filed to try and save Issue 7. Click here to read the full petition. Conclusion: “rehearing should be granted, and the mandate recalled.”