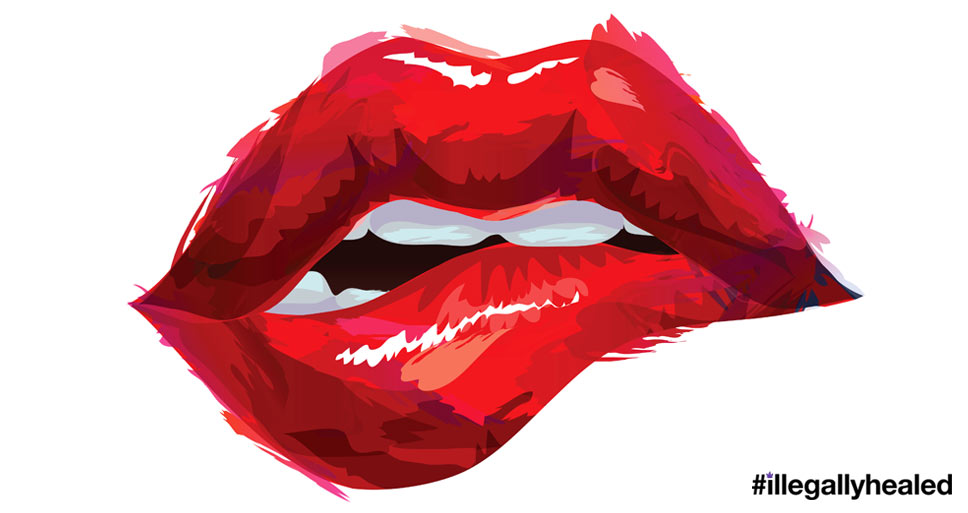 Sex Sells. It’s been the mantra of mad-men advertisers since the 1950s. But does cannabis legalization really need sex to sell?

Despite the national conversation on cannabis shifting from safe medical access to broader adult use legalization, the issue of the sexualization of women to promote medicine in the nation’s oldest and largest medical cannabis market, California, has been the topic of heated debate since the industry came above-ground in 2009. While California debates legalization, other states are still awaiting medicalization. What sort of message does promoting a medical industry with stripped-down women send? What sort of message does promoting political debate about how to best legalize and regulate cannabis send when staring at a women suggestively pulling down her pants?

A new meme is circulating the web from within California’s medical cannabis industry in opposition to this year’s legalization initiative, the Adult Use of Marijuana Act (AUMA). Both the opponents and proponents of AUMA would largely consider themselves pro-cannabis, a running theme in the state’s inevitable trudge toward legalization.

This sort of imagery sends a sharp message to middle America, to the states with the most draconian drug policies, that the industry doesn’t really take itself seriously either. Every mostly-naked nurse promoting medical cannabis is two steps back for the families who are fighting in their state’s capitals for safe access in places like Utah, Georgia, Florida and Missouri.

Like 2010’s narrowly defeated legalization initiative, Proposition 19, AUMA has furthered the divide within the nation’s oldest, largest, most lucrative and most diverse cannabis market. Nationally, the issues of race, legalization, America’s failed War on Drugs and feminism have largely come to a head in 2016. Cannabis politics have gotten just as divisive as presidential politics, with everything on the table in light of a possible Trump presidency. For the cannabis industry, this year’s election is just as divisive. The industry as a whole is walking a fine line between free-loving hippie gardens and Wall Street funded mega grows. Just as a Trump presidency would send a message to the world that America is extremist and dangerous, the future of legalization in California will be life-altering to many who rely on it for health or wealth.

Like national politics, cis-gendered White men have largely dominated. These last few elections have threatened to up-end that. Women, LGBTQIA people and people of color have started pushing for inclusion, and in some cases even reparations, in an industry that has largely been whitewashed and has continued to commodify women in marketing medicine with no shame.

Legalization is not a hard sell and neither is cannabis itself. Sex isn’t a necessary component of sales. Further, the divisions in the industry have not been so much about the substance itself, but more about the regulation of legal businesses and who stands to benefit from the way the laws are written.

In general, the use of sexualized women to sell things is both sick and tired. Women have 85 percent of the nation’s consumer buying power, the mad men of the 50’s sexualized women not to sell to men, but to convince women that they will never be perfect and that another fad product could hold the key to beauty, and therefore, happiness. That isn’t cannabis.

It’s time for the industry to police itself, to weed out any sort of messaging that distracts from the point or marginalizes already marginalized people. This is an important election for freedom. Unity comes from compromise, from appealing to all the stakeholders, not just shareholders. In November six more states will vote to become medical, meaning within Obama’s 8 years, the total of medical cannabis states could go from 13 to 31. The tally of adult use states could climb from 4 (plus DC) to 11. This happened in spite of the industry’s flaws, not because of them, and our new president may not support the current administration’s position on the proliferation of pro-cannabis policy.