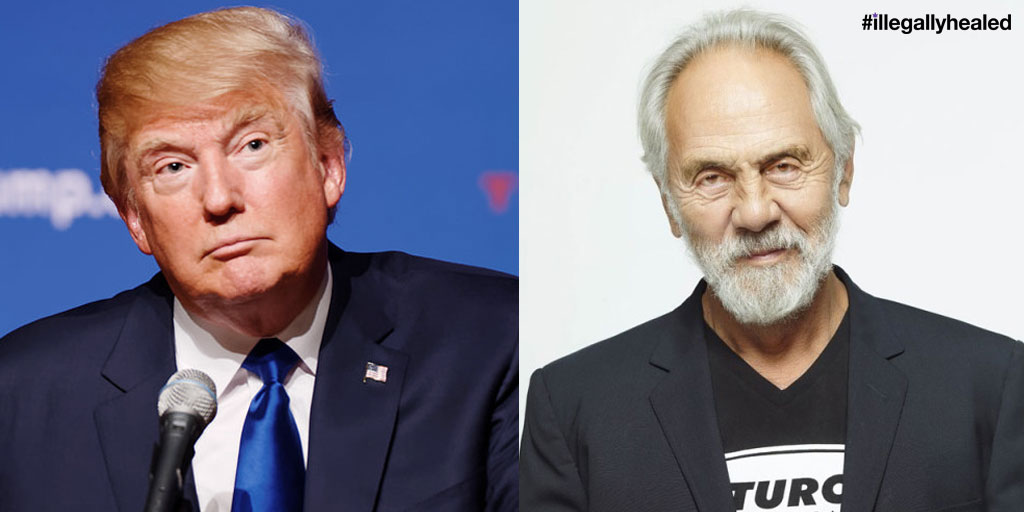 I know, I know … why compare when Tommy isn’t even running? Well let’s be honest, it seems anyone can run for POTUS these days. Just look at Trump.

I think we can all agree that what America needs in a leader is someone who has felt as you have felt, suffered as you have suffered, experienced what you experience on the daily. That’s not Trump is it? Entitled would be a good word to describe his life.

Tommy Chong on the other hand, has some experience with life along with some of the issues that you and I may have dealt with too. Speaking of hands, don’t expect to shake Trump’s hand. He’s a sanitizer-loving germaphobe who refuses to push elevator buttons or shake hands.

I’m a Canadian who grew up and still live very close to the American border. My hometown area is cottage country and with it came the Americans. I’ve served you meals, sold you gasoline, filled out your fishing licenses and picked out your minnows. I flirted with a few of you too! I feel that our futures are bound to one another .. we are kin by proximity. I know and love Americans, and I’ve generalized about them too. We all do it. Americans are this; Canadians are that; Mexicans are … ugh I might stop there.

In the end, most of we humans want the very same things. We are not so unalike. If we shook it all out– this rug of opinions and duties and beliefs– we’d see that our wants can be boiled down to three words. And these three words in my opinion have been in Chong’s back pocket for all of his days: Life, Liberty, and the Pursuit of Happiness.

They say that you appreciate life more when you’ve had to fight for it. Tommy is once again facing a battle with prostate cancer, so he’s savoring every moment of this life. And Tommy values all life. Not just the white lives, or the rich lives, or the lives that smell nice, or the lives that dress nice. Chong was genetically designed from the get-go to value the diversity of life. Mama Chong was Scottish-Irish and Papa Chong was a Chinese immigrant.

The freedom to be what he wanted to be, that’s a flavor I get from Chong. From his early years of playing guitar to charm the girls and then later in several bands including Bobby Taylor & the Vancouvers, Tommy was living free. He took bigotry and laughed at it, even back then in the 60’s. Perhaps it is the struggle for liberty that forms this value in one’s core. Can any of us really feel that unless ours has been challenged?

I can’t help but see and smell the irony when I consider how much of North America is about profit. And yet when Tommy Chong tried to help his son Paris make some profit of his own, he was condemned, charged, sent to the clink. He spent nine months in there and in a recent interview, Chong says he had just one bad half hour in jail, that being the first half hour. 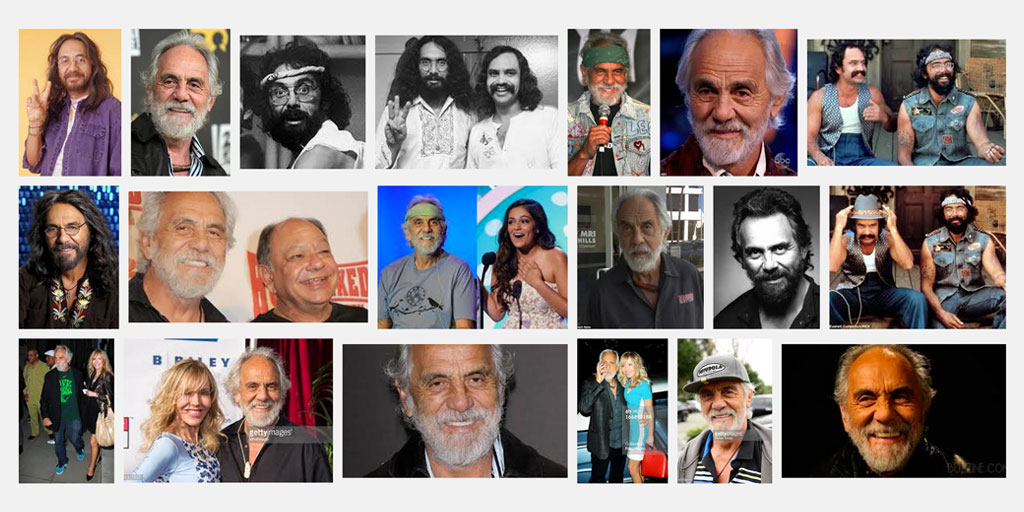 Google images is over-flowing with images of this smiling, fun-loving man who has never stopped pursuing happiness.

Google images is over-flowing with images of this smiling, fun-loving man who has never stopped pursuing happiness. While inside prison, he joined others in their various religious ceremonies, always open to receive a message from Spirit. Through his music and movies, roasts and comedy tours Tommy perpetuates that one core desire: to be happy and free to do that which makes him happy.

I am convinced that Chong would trump the Donald in 2016

Reputation alone would see Chong bury Trump. I mean, by his own design Trump has created a reputation of the evil master who sits on a thrown and is feared. While Chong seems bent on simply being seen as one of the people, showing up at compassion clubs and charity functions even to this day. Giving support or getting support, Chong is out there smiling and interacting showing respectful dignity to everyone he meets. While much of Trump’s publicity and I dare say support is due to mere name recognition. With the shock-value loving media we have today, that’s not a good thing.

Money-management skills are also definitely needed to be leader, and we could compare the two quite easily thanks to google. According to the internet, Chong is more than comfortable and has never had to file bankruptcy. Trump on the other hand, has been bankrupt four times. Do you really want THAT running the country?

Integrity and selflessness is something that the leader should have. What would the Lion do for the Pride? In Chong’s case, he took a plea deal for something that perhaps he wasn’t responsible for and he spent nine months in a Federal prison to keep his son and his wife from being implicated. If that were Trump, he’d allow the Feds to bankrupt the country before he’d ever inconvenience himself. 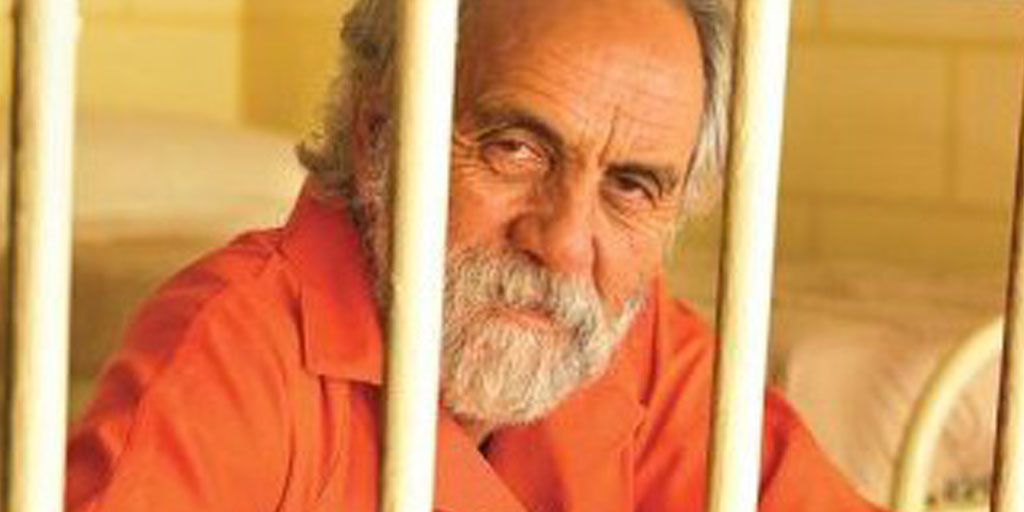 The I Chong: Meditations from the Joint via Amazon.com

Speaking of the clink, many of you love someone who has been incarcerated like Tommy. Who better to change this for-profit prison system, than someone who’s been there? Likewise, who better to change this for-profit legal system, than someone who’s experienced it’s wrath? On this subject, Chong and Trump couldn’t be at further ends of the spectrum. Chong abhors this system; Trump undoubtedly profits from it in some way. If Trump wins, he’ll likely create “Trump Institutions” where he’ll power it all by forcing the immigrants to ride power-generating bicycles in the basement!

Tommy Chong’s life has been a tribute to the Cannabis plant and thus the freedom to choose. That’s a respectful leader. To this day, the plant assists Tommy in coping with traditional cancer treatments. This is how he beat his prostate cancer in 2013; this is how he’ll beat it again too. Chong as POTUS would effectively make him the first President to cure himself by integrating Western Medicine with medicinal Cannabis. 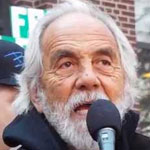 Chong would no doubt repeal Cannabis prohibition and strike it from the Schedule altogether. He’d also likely offer you the respect to cultivate your own medicinal Cannabis at home. The latest poll by CBC shows that 61% of Americans are in favor of legalization. If all voted for Chong, that one election issue would make a big dent.

Trump on the other hand, wanes from side to side depending on what company he’s in. He boasts to have never consumed a drop of alcohol or coffee nor has he used any drug or smoked tobacco. I’m sorry … but that’s just weird. I know a guy who’s never had yogurt or a banana or chocolate cake made by anyone other than his mummy. It doesn’t mean he’s more refined than the rest of us. It means he’s boring and one-dimensional and possibly afraid to open his third eye!

A recent article quoting some of Trump’s supporters shows they see him as one of their own. Simply because he has no filter and doesn’t read a script? This could not be further from the truth. If I were a Catholic American, I’d be crowdfunding to hire an exorcist! The devil is using Trump to ruin America. Every sentiment out of his flappy jowls is vitriolic and marginalizing and with the intention of separating every single one of you. He is not one of you. He is everything our mothers warned us about and worse!

In researching Chong and his life, I found this quote and it brought tears to my eyes. It could be the most important lesson Chong’s mother ever gave him, and in my opinion there was a dash of foreshadowing too. She said,

“Remember this: you’re mixed so people are always going to look at you, they’re going to notice you. So it’s up to you how you conduct yourself, but you’re going to be noticed.” -Lorna Jean (née Gilchrist)

And he was noticed. And he still is. Only now we can look back on the evolution of Thomas B. Kin Chong’s life, and see that deep down his values are the same as so many others’ across the United States of America. It could be argued that his whole existence is and has been about those three values stored deep in the mitochondrial levels of his DNA.

Chong’s existence is about Life, Liberty, and the Pursuit of Happiness, and in my opinion, that’s a pretty good thing for the POTUS to have.