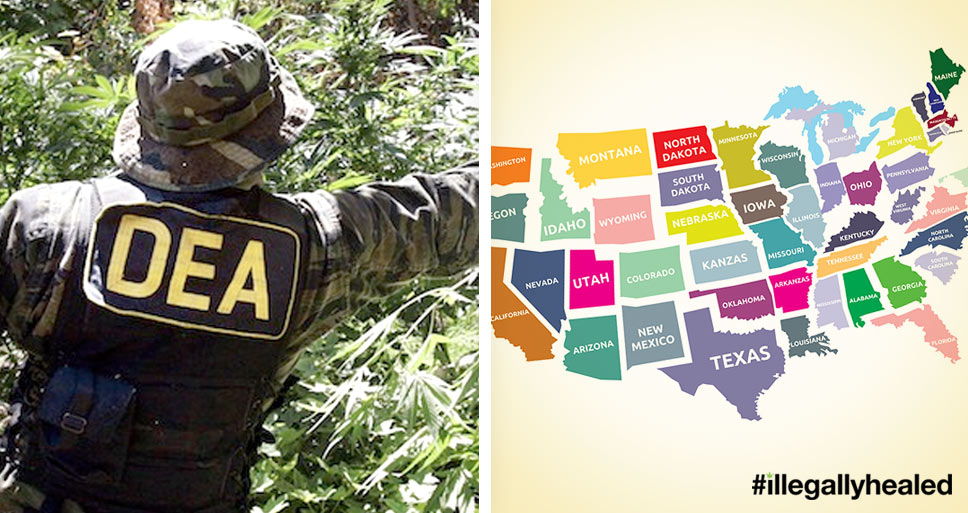 The DEA is about to reschedule cannabis. On the surface, this is a huge step for a rogue governmental body that has, since its inception, considered cannabis a very dangerous drug that must be eradicated. In reality, the move paves the way for less effective prescription cannabis.

More than half the U.S. population now lives in a state that has legalized some form of medical cannabis use, which has forced the federal government to evolve its position. International headlines have generated a lot of excitement both about the economic potentials of industrial hemp and adult use legalization, but also the potential of cannabis to succeed in treating the symptoms of so many diseases where so many more dangerous pharmaceutical drugs have failed.

The more stories come online of patients’ success in states with functional medical cannabis systems—such as California, Oregon, Washington and Colorado—the more suffering and dying patients in other states are forced to make the decision to leave or wait in pain, wait for the next election or for their legislators to come around on the issue.

One of the areas of medicine where cannabis shows the most promise is in the treatment of autoimmune diseases, particularly Multiple Sclerosis (MS). There are as many as 80 different conditions considered to be autoimmune, ranging in severity from psoriasis and rheumatoid arthritis to Crohn’s, lupus, fibromyalgia and MS. In general, autoimmune diseases cause the body’s immune system to attack its own tissues, cells and organs.

The causes of these illnesses are still unknown, but many believe they are a result of genetics and environmental conditions. They are on the rise and there are no cures. The classes of drugs used to treat the symptoms are uncomfortable at best and deadly at worst. Autoimmune patients in states with fully-functioning medical cannabis systems are already utilizing cannabis in addition to their traditional treatments or as an alternative. There is evidence that cannabinoids found in cannabis have the ability to suppress the immune response, reduce inflammation and protect the parts of the body attacked by these diseases.

Unfortunately what is known about the effects is largely anecdotal and doesn’t fit into the FDA approval process. In order for a drug to become FDA-approved, it must first be tested for safety and efficacy. In the case of most pharmaceutical drugs, the active ingredient is usually one chemical compound. This compound is then run through a series of clinical trials and studies before the FDA approves it for prescription. This process costs upwards of $500 million per new drug. 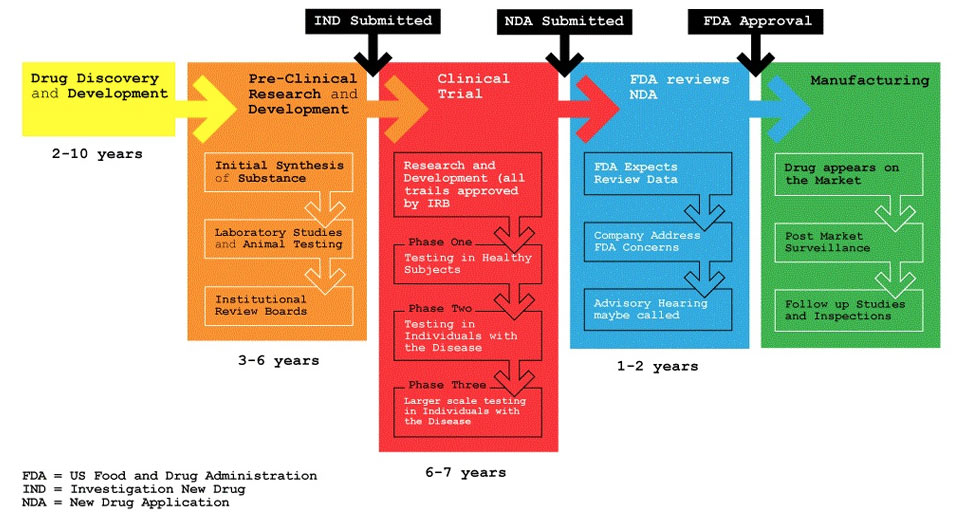 This creates a conundrum for approval of cannabis as a drug that can be legally prescribed by doctors and covered by a patient’s insurance. Each individual strain of cannabis has 400 or more active chemical compounds, many of which very little is known about, although the substance as a whole is non-toxic. Each of these compounds must be proven safe, a process that could take years and hundreds of millions of dollars. Further, who would seek to get all forms of cannabis FDA approved when the cost is so high to do so? Any company that will invest that sum money expects a comparable return on investment.

For patients who wish to seek cannabis as a medicine in its proven most effective form, botanical, the only option is to live in a state that allows its cultivation, manufacture and sale. Patients in states with CBD-only laws and those where cannabis is still completely criminalized must either forgo cannabis medicine or risk arrest, prosecution and loss of one’s freedom and property.

When the DEA reschedules cannabis, patients in these “prohibition states” may soon have a legal option—with a catch, of course.

The Promise for Patients with Multiple Sclerosis

Cannabis has largely become a well-accepted treatment for MS. Mainstream organizations like the National MS Society have formally stated their support for the rights of people with MS to work with their physicians to obtain safe access where it is legal and they support further research into the plant’s benefits. 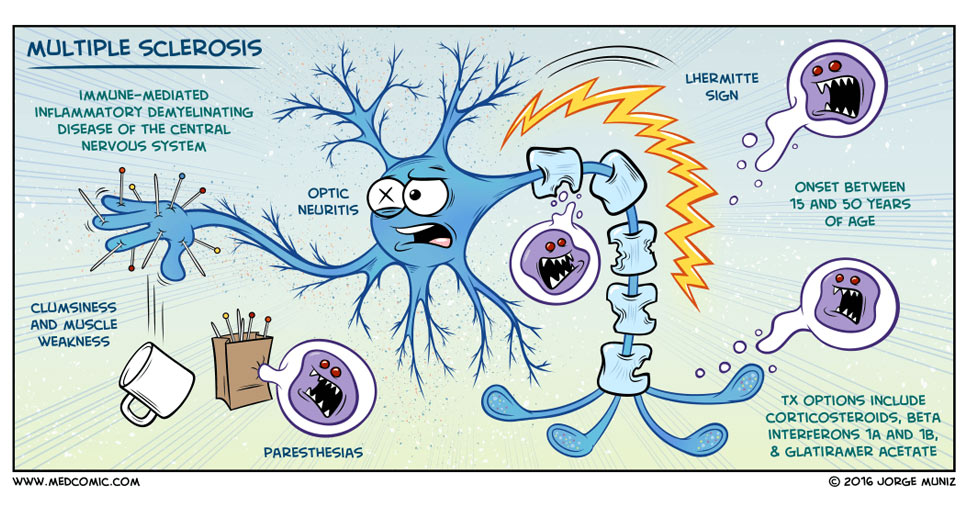 Multiple sclerosis is the most common neurological disease causing permanent disability in young adults and is thought to affect more than 2.3 million people worldwide.

MS is an autoimmune disorder that causes the immune system to attack the myelin sheathing, the covering alongside the neurological highways that connect the brain to the body. Each patient’s course and severity with the disease is different and the symptoms are broad and destructive, ranging from numbness in the limbs, extreme pain throughout the body, vision problems and vertigo, fatigue, muscle weaknesses and spasms, up to mood swings, depression, loss of bladder and bowel control, and cognitive dysfunction. Complications of MS are potentially fatal, and patients living with MS have a shorter life expectancy than the general population.

One of the drugs used to treat MS, Tysabri, has a list of common side effects, which include headaches, joint pain, swelling and disruption to the menstrual cycle. In very few cases it causes a rare fatal brain infection and over time may cause liver problems. By comparison, it seems silly that cannabis would need to be FDA-approved for autoimmune patients to “experiment” despite a lack of clinical trials and FDA-approval, which all the currently used drugs have passed with muster.

The side effects of cannabis are benign, ranging from red eye and dry mouth (which is cured with a glass of water and Visine) to increased appetite and sleep. In some cases users feel high levels of anxiety or panic, yet they are pharmacologically safe from overdose and the unpleasant effects are temporary.

Use cannabis now or wait for a prescription?

Despite the known efficacy and anecdotal success stories of all types of cannabis use in relieving the symptoms of MS and other conditions, there has still been a push from both pharmaceutical companies and their investors as well as groups opposing medical and adult use legalization to extract what could be considered the “active ingredients” in cannabis by standardizing and approving them for pharmaceutical production and use.

It’s been done before, and didn’t work so well the first time.

Since it was first identified and isolated in 1964 by a team of Israeli scientists, ∆-9 tetrahydrocannabidiol (THC) has been considered the “active ingredient” in cannabis. This identification fueled both a cultural worship of THC among enthusiastic users alongside a pharmacological demonization of the compound by law enforcement and medical professionals.

During the height of the AIDS epidemic in the early 1980s, anecdotal stories began to surface in the media espousing the benefits of smoked marijuana for AIDS and cancer patients. Marinol®, a synthetic pharmaceutical THC, was approved by the FDA in 1986 to meet the demand for the illegal drug.

“Marinol, despite the fact that we taxpayers paid for most of the development, is very expensive,” Dr. Lester Grinspoon told Mother Jones.

Marinol also proved to be less effective than whole-plant cannabis. Patients experience negative side effects from the isolated THC which they don’t experience using botanical cannabis. Grinspoon also points out that the ability to titrate—inhale a small dose and evaluate it before taking more—is removed from patients when taken orally. He notes the bulk of people who have prescriptions for Marinol may hold the prescription in order to explain THC in a drug test.

The U.S. government saw a chance to make something they can control…

Grinspoon is associate professor emeritus of psychiatry at Harvard Medical School and author of the groundbreaking 1971 book Marihuana Reconsidered. In the 1960s Grinspoon had set out to study the growing use of cannabis, which he considered a harmful drug, and instead discovered the opposite. He has been studying cannabis and advocating regulations in line with the science since that time.

“…These are powerful companies. They make a lot of money and they have a lot of money. The U.S. government saw [with Marinol] a chance to make something they can control and put an end to the marijuana for medicinal purposes debate. And now here’s Sativex,” Grinspoon continued. 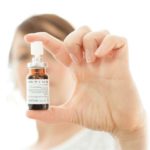 Sativex® has now been launched in 15 countries and approved in a further 12. – Photo: GW Pharmaceuticals

Enter, Sativex®, an oral tincture made from cloned plants grown in a controlled greenhouse by British company GW Pharmaceutical. It was designed specifically to treat the spasticity associated with MS and is being prescribed and used in Mexico, Canada and parts of Europe.

Development of Sativex began in 1998 with the aim to create a cannabis medicine that could be standardized, approved for use in traditional pharmaceutical medicine and prescribed by doctors. Each spray of oral Sativex contains the exact same dosage of the exact same blend of cannabis medicine. In 2014 the FDA gave Fast Track designation to Sativex, meaning they were rushing it through to get it to patients in need. Sativex is still not available by prescription in the U.S but is expected to be approved for MS and other autoimmune conditions.

“The biggest problem with [Sativex] is that it’s going to create another commercial pressure to keep the stuff prohibited—the government can do what it hoped to do with Marinol. It’s going to make it less possible to create an environment where people will be freely allowed to use cannabis responsibly for medicine or for anything else they want,” Grinspoon continues. “Sativex is the kind of thing I was concerned about when I first spoke of the concept of pharmaceuticalization in 1985 to describe Marinol… I would challenge Sativex to compete against smoked marijuana in almost every one of these symptoms or syndromes.”

If the DEA removes cannabis from Schedule I and places it in Schedule II, Sativex and other pharmaceutical cannabis products could effectively prevent botanical cannabis from becoming law in states that currently don’t have medicalization. GW Pharmaceuticals already has Epiodolex, a standardized high-CBD tincture, on similar fast-track status with the FDA, and other companies can standardize their own lines of tinctures if they have the money to invest as well.

But will it work?

Nearly all the cannabis success stories in the media come from studies involving smoked cannabis high in THC or people living in states like California, Colorado, Oregon and Washington, where the plant has been a low criminal priority and available medically for 15-20 years. Patients stuck with only Sativex or Epidiolex may see improvement, but without the opportunity to try different methods of ingestion, strains or dosages, they may not experience the same sort of life changes as patients in legal states.